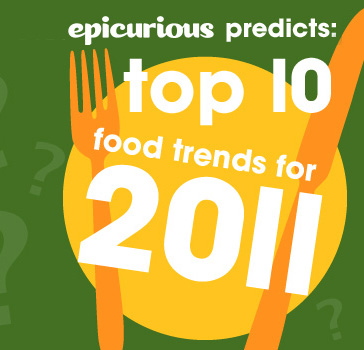 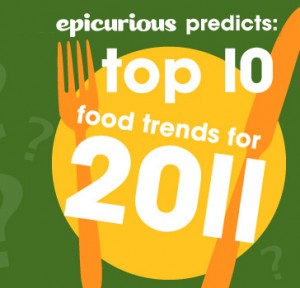 It’s that time of year and the cliche that ‘only fools make predictions’ appears in the opening line to the Epicurious blog entry.  It’s their Top 10 (very much American) food predictions for next year.

What makes this one more plausible is their past track record. Last year they did a ‘on the front burner’ ‘moved to the back burner’ list that from my reading of the US food media was close to the mark.  Mini-cupcakes, the rise of the butcher, lamb is the new pork, health concerns, and they said  ‘we love you but we’re over you’  Curtis Stone.

If you can relate to those, see what you think of their list here (and it’s ok to feel a little superior).

Here’s mostly their words, mine are in italics. Read the original blog for links that support the Epicurious arguments.

Meatless Mondays & Tofu Thursdays
Although the butcher is hero, there is a concurrent trend of eating less meat. Michael Pollan can take a lot of that credit. Of course there’s the high price of meat in the US as well.

Pop-Up Cafés
Following on from Food trucks. “Chefs can create their own venues, in art galleries, public areas, or their own homes.In Los Angeles, chef Ludo Lefebvre opened what he calls a “guerilla style pop-up restaurant,” LudoBites. And Top Chef’s Stephanie Izard (of Girl and the Goat in Chicago) started out with an “underground” place called ‘Wandering Goat’, which enabled her to preview her menu and generate publicity.”

Sweet Potatoes
Finally getting the love it so deserves in the USA. With this fall’s bumper crop estimated at two billion pounds, more prominence on restaurant menus (not just in fry form), and an impressive nutritional profile, the sweet potato will be crowned the Vegetable of 2011.”

A little distressing however is that the everyman American has forgotten how to handle a root vegetable and can’t seem to peel and slice their own. Then have to fry them because they’re called ‘potato’.

“According to The New York Times, ConAgra just opened a plant devoted to processing frozen sweet potato products, and Google searches for the root vegetable (OK, albeit in fry form) have jumped 40 percent from last year”.

Urban Wineries
Learn wine making enabling you to become the Mondavi of your block.

And the US food mags have finally discovered

Because of the widespread popularity of Spanish cuisine, the lovely smoky Pimentón de La Vera is gaining traction stateside, on restaurant menus and with specialty stores and online retailers.

Ok that’s pretty US centric, anyone want to add an Australian trend they see over the imminent horizon? Add your comments below.

It’s that time of year and the cliche that ‘only fools make predictions’ is the opening line to the Epicurious blog entry of 2011 food trends.