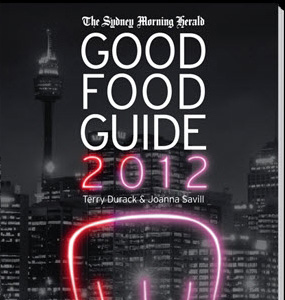 A year of dining simplicity and maturity. That’s how editors Terry Durack and Joanna Savill summarised the year for this/next year’s Good Food Guide. (I’m sure the 2011 Guide was only out a few months ago. Maybe I just don’t get out enough.) As usual, there’s some up and downs in the Chefs Hat ratings that will cause some buzz in the big smoke, but as always we want to know about the Regional winners.

(This Regional award’s sponsor seems uncertain each year. Last year it was Navman, this year it’s Gelattissmo. Vittorio seem to be the one stable supporter of the city awards, so where’s the country one? NSW Tourism maybe?)

There’s our our usual full list of venues and their websites below, but here’s the movers in the Regional list.

Going Down.
Ashcrofts (Blackheath) and Waters Edge (Canberra) both lost their one hat from 2011.