A Gouda for the Teacher 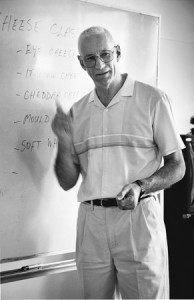 It’s fitting history that Neil Willman’s great, great grandfather James was convicted in Surrey England in 1829 for the theft of a cheese.

He was sent to Tasmania for 7 years where he married another convict and started the Willman lineage that lead to Neil who was born in Bendigo in 1953. The family soon moved north to a little town called Dingee where his parents set up a small dairy farm on 50 acres when Neil was two.

After four years the family moved to Rochester to a larger 145 acre dairy farm with some beef and sheep. The milk was typically for the time separated with the cream being sold to the local butter factory and the skim being fed to the Willman’s pigs.

Neil finished his schooling at Rochester high school before going to work for Murray Goulburn in 1971.

Due to a romantic distraction in his final high school year Neil’s results were not as good as he would have hoped so rather than follow a university path he applied for a place at Gilbert Chandler College to study Dairy science. The only way to get into the college was to be sponsored by a dairy factory. So with his fathers help he started at Murray Goulburn at Rochester in the butter room as moisture boy, doing butter moistures and butter salts. Neil then applied to Gilbert Chandler and after an initial knock back he eventually was offered a place. This was full time from March through to August during the “lay off” time in the dairy factories when dairy cows were being dried off and milk production low. So in the March of 1971 at the tender age of 18, being the youngest student on campus Neil began his association with Gilbert Chandler College.

He was also the least experienced student. While most of the other students had years of experience in the dairy industry Neil was effectively just out of school.

Neil was determined not to repeat his mistakes of the final year of high school and with that in mind his application saw him dux at the end of his first year. An achievement he is very proud of to this day.

The added incentive for higher achievement was that only half of the students would be selected for the final third year of the diploma course.

At the end of the first year Neil returned to Rochester and through various positions became a butter maker.
After graduating Neil was thrust into the position of milk production supervisor at Rochester. A very senior position for one so young. At 20 years old he was the youngest person in his department with 35 employees under his supervision. Neil remembers it as a huge learning curve and a very demanding time working six days a week and on call 24 hours a day.

The college was known as the Gilbert Chandler Institute of Dairy Technology and was part of the Department of Agriculture.

During Neil’s diploma year a romance blossomed with a young technician working at the college and within a few months of graduating Neil and Carole were married. They then moved into the old hospital in Rochester. Carole being a Werribee that is were they were married.

Neil worked a further two years in the role of milk factory supervisor before applying for a job at Gilbert Chandler in the fermentation science section as a technical officer. His application was successful. This is 1975. Neil and Carole then moved to the Research farm living 100metres from the institute for 3-4 years. During this time they saved enough to buy a 5 acre block of land at Little River where they still live. This was 1979. Their daughter Tracey was 18 months old when they moved to Little River.

After two or three years as a technical officer Neil had the opportunity to become an extension officer visiting the speciality cheese makers for 12 months. This was Neils first contact with the speciality cheese makers who at that time were Italians and Greeks making fetta, mozzarella, romano, etc. This is 1978. These were the post war migrants wanting to replicate the cheeses of their homelands.

Neil says this was a wonderful time for him as he made many friends with these migrant families some enduring to this day. Companies such as Floridia and Pantalica still are run by the generation that Neil worked with.

At the end of Neil’s year as an extension officer the position of factory manager became vacant. Neil was initially not interested but when he was persuaded to apply he did so on the condition that he could turn it into a small commercial operation, which he did and ran very successfully for 7 years.

Utilising this milk Neil started making cheddar, romano and the semi hard types of cheeses as well as cream, yoghurt and butter. There was a shop attached to the factory open two days a week selling the produce from the factory. This proved very successful with the shop selling $2,000 to $3,000 worth of produce a week.

Around 1987 the milk research facility was moved and the supply of milk disappeared overnight. Neil then went into lecturing full time.

When Neil saw the first camembert appear in the market place in the early eighties ( made by Klaus Helming in Moe) and other cheese such as Unity Blue from my home town of Toowoomba in southern Queensland he began teaching the manufacture of them in his courses. On a 1986 study tour of the U.S. and New Zealand he visited a blue cheese factory in the US and a white mould factory in NZ.

Neil still neither had the equipment or enough expertise to make these cheeses. The opportunity came when he received a study tour grant to visit Europe in 1990 that he gained the information and equipment supply to embark on these cheeses back home.

He visited Switzerland, France and the Netherlands, Germany and Denmark over the three months.

So from 1990 all Neils courses included camembert production.

In the late 1990’s Neil experimented with washed rinds and blues developing his own recipies and including the production techniques in his courses.

Then in 1999 Neils international experience broadened with judging at the British Cheese Awards, followed by the World Championships in Wisconsin in 2000. Back to France in 2001. Neil says his knowledge of specialty cheese was growing exponentially. Neil was the factory manager however when the scientific officer responsible for teaching the cheese courses resigned Neil was informed that come the following Monday he was to be a lecturer as well as the factory manager.

Melbourne University took control of the college in 1995.

Due to a lack of direction from the top Neil was left to create his own little empire, designing and running the courses he thought suited the needs of the industry.

From 2002 there was talk of the closure of the college and that came to pass in December 2005. However Neil had built a very strong reputation within the cheese industry which allowed him to set up his own consulting business, Cheesexpertise with a strong demand for his services from the day he left Gilbert Chandler. In fact the demand has been so strong that Neil has to decline much of the work offered to him. 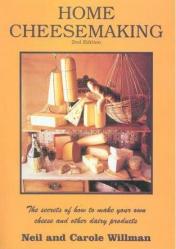 Carole had started running home cheese making workshops and the demand grew for a book outlining the basics of cheese making, So one summer holiday they put it all together and test drove on their daughter, Tracy and Carole’s mum, neither of whom had any idea about cheese making. They figured that this would give them an idea if the book was going to be useful to beginners.

Now in its second edition and many reprints this would have to be Australias most successful cheese making publication.

When I asked Neil if there had been any people who were major influences in his career he answered in the negative. It would seem that Neil has simply created his own path.

Along this path in 1997 he was elected federal president of the DIAA. This was a major step for a retiring almost shy person and Neil says it was this position that helped give him the confidence to interact with his peers and superiors.

Where is the speciality cheese industry in Australia today?

Neil’s opinion is that in some larger sectors of the industry the flavours are being dumbed down to give wider market appeal.

However at the same time there is an increase in the smaller regional manufacturers making exciting cheese and increasing the cheese knowledge in their area. We are seeing a trend to regional cheese production.

Neil sees this as one of the most exciting developments in the industry where you have to travel to a region to experience their cheeses. This is in the European tradition.

Summarising the quality of cheese at the show Neil and I agree the judge off for champions saw the best line up of cheese either of us have judged in Australia.

This is looking good for the industry.