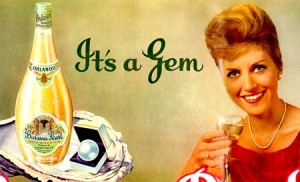 Remember life before pizza? This timeline tells the story of Australia’s food revolution.

We baby boomers have lived through a time of great change in Australian food. This timeline chronicles many of those changes (and some that came earlier). It grew out of my just published book called Me and My Big Mouth – Living through Australia’s food revolution by me (Jan O’Connell).

The book is essentially a memoir, with a focus on food. It looks at the changes in the way the baby boomer generation ate and shopped. The timeline is an expanded list of the facts and dates I accumulated in the process. 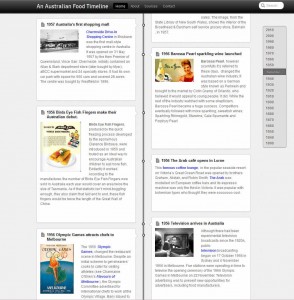 It’s not comprehensive. It’s a but thin on specific dates for indigenous food that stretches back for millennia. It also, currently, is pretty light on the first century of colonial settlement, which I’m adding slowly. It focuses on the two centuries I’ve lived in, and has an east coast bias (sorry, Western Australia) because that’s where I’ve spent my life, aside from a few overseas sojourns and a brief spin around Australia’s perimeter in the 1980s. The timeline incorporates some international milestones that were significant for the way we eat in Australia (the founding of McDonalds for instance).

There are lots of links to other food-related articles that give more detailed information about the entries. To browse, start here.

The timeline itself has it’s own book. Details on the timeline website.