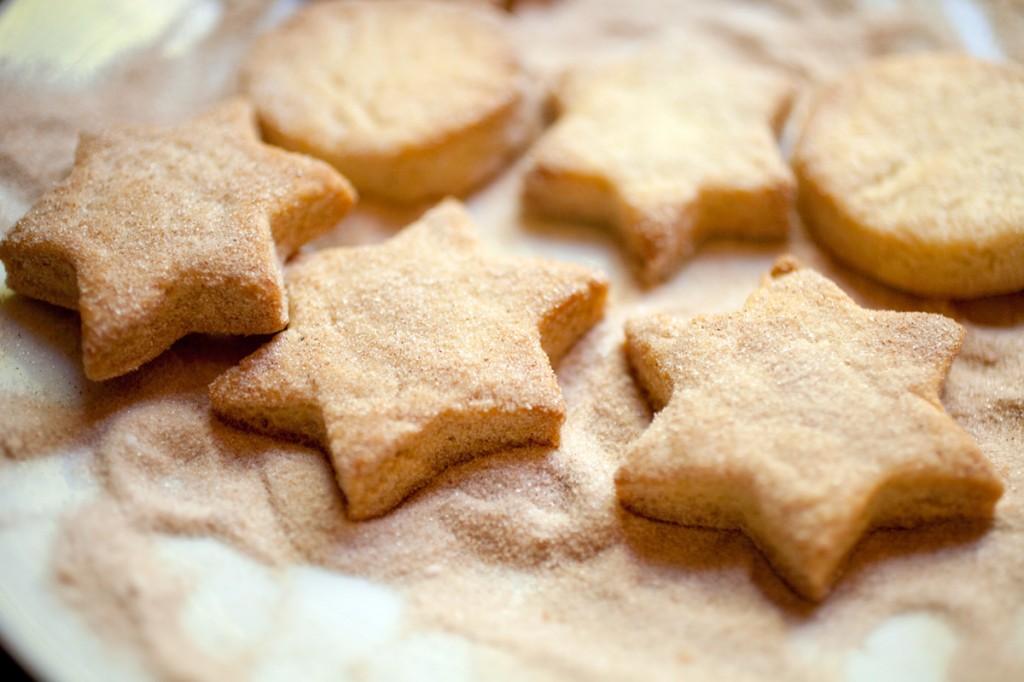 You know that a something is important to a local culture when it’s officially adopted by ‘the State’ as an emblem. There’s State birds, flowers etc. (sometimes rare ones that no one recognises but officaldom feels we should) all given an ‘official’ status as representatives.

Since we’re a food focussed publication it was hard to resist the story of this official State biscuit.   “Biscochitos have a long history that stretches all the way back to Spain. Known as Mantecosos (or Mantacados) across the Atlantic (that means buttery in Spanish), these little cookies are sometimes called Mexican Wedding cookies. In fact, the name of this delicious little cookie has caused quite a debate. In northern New Mexico, they are known as biscochitos and biscochos in the southern part of New Mexico. When this cookie was made the official state cookie in 1989, the state legislature had to debate on how to spell the name. The Senate finally decided on bizcochito, though you still see it with multiple spellings.In 1989 New Mexico House Bill 406 declared the bizcochito as New Mexico’s Official State Cookie.”

Saveur have a short piece that describes the tradion of the nine consecutive days of ‘Las Posadas’ which start on December 16 . These are “private parties (held in churches, homes, and schools) in which guests reenact the biblical story of Joseph’s asking for shelter for himself and the pregnant Mary” – with half the guests outside asking for refuge, with challenge and response calls until they are let in. Then of course they share a meal that includes these biscuits.

These biscuits came from Spain, travelling with the Christian invaders of the Aztec Americas. Whereas in Mexico and New Mexico, they can be a ceremonial biscuit year round, in Spain they’re CHRISTMAS.

You may have seen  queso mantecoso a soft buttery Spanish cheese and mantecoso means greasy, or creamy and buttery.  The references to this biscuit which basically a classic shortbread seems to call them Mantecados

I let Google do a translation of a Spanish language website that tells of the origins of mantecados. Taking out some quirks, the result goes something like this.

“The origin of the Spanish Mantecado dates back to the XVI century, a time when the region of Andalusia experienced a surplus of grains and pork products. Around this time, a certain type of biscuit commonly known as “lard cakes”, “tortas de manteca” were popular in every house and specially in the religious convents like the famous Convent of Santa Clara, where the historical archives reference the kind of dishes and ingredients used to make these biscuits.”

They’re now a specialty of the Andalusian region of  Estepa where once the pig herds grazed freely in large tracts of oaks. The trees were removed in the eighteenth century by French troops  to prevent at first the guerrillas hiding there, and then bandits. Today the tree less plains grow cereals.

The beginning of the marketing of mantecados occurred in 1870 when Filomena Micaela Ruiz Tellez,  known by the nickname “The Mattress”, (and I checked the translation of “La Colchona”), heaven knows if she was a woman of loose morals or just very friendly to earn the name. We do know she had a  husband, who was Cordoba Estepa goods carrier, and sold the biscuits in the markets he passed. So maybe as he was away a lot…

Micaela’s success was based on a recipe which improved over time so that the biscuits travelled and stored better. The formula was so successful but they’re always soft on the inside and out. In 1934 there were about 15 homes in Estepa that had turned into small factories and little by little they were opening markets further and further away.

Currently, montecados are manufactured in a wide geographical area, not only in Andalusia, but the town of Estepa Sevilla remains its main center.

There have been significant improvements in packaging to give them a long shelf life: seals, single pack vacuum, etc. These improvements in production begin in late summer and are stored for the holiday season, which has ended the practice of spending endless hours in the home factories.

Today there are 30 factories of these biscuits in Estepa, 20 of them are grouped in the Association of Manufacturers Estepa Montecado AFAM. The association works to seek government assistance, offers business counseling, and works to  improve the marketing of their products. ”

A feel good and taste good story I reckon.

This is one of those  ‘my mother makes better biscochitos than yours’ products, and the differences in the recipes online are not just slightly different (grease the baking tray, don’t grease the baking tray) but in the one egg, oh no three eggs style. You get the idea. 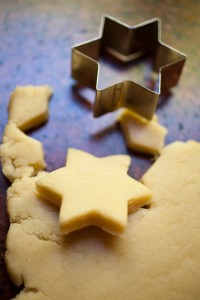 The New Mexico  tourism site offers this one which we’ve made.

1. Sift together the flour, baking powder, anise, and salt.
2. Beat the lard in a electric mixer, gradually adding the sugar, and cream until extremely fluffy and light, about 8 minutes.
3. Add the egg, followed by the wine, and continue beating.
4. Mix in the dry ingredients, adding about one-third of the mixture at a time. Stop the mixture as you make each addition, and beat no longer than necessary to incorporate the dry ingredients. A stiff pie-crust type of dough is what you’re seeking. 5. Chill the dough for about 15 minutes for easy handling.
6. Dorothy ( we never found out who Dorothy is) uses a cookie press to form her biscochitos, choosing a fleur de lis design. The results are beautiful. If you don’t own a cookie press, the dough can be rolled out ¼-inch thick on a floured work surface and cut with a small cookie cutter. Avoid handling the dough anymore than necessary. Transfer the cookies to ungreased cookie sheets.
7. Preheat the oven to 350º F, when ready bake the cookies for 10 to 12 minutes, until just set and pale golden. While the cookies bake, stir together the topping ingredients.
8. When the cookies are done, cool for just a minute or two on the baking sheets, then gently dunk the top of each in the cinnamon-sugar topping.
9. Transfer to absorbent paper to finish cooling. Biscochitos, tightly covered, will keep for at least a week.

Then there’s some variations that seemed worth a try. In the video above the biscuits are dusted before cooking. Some call for glazing after baking.
I made the following recipe which gave the bicochitos in the photo at the top of the page. One thing that is important for all these recipes that these are ideally soft and crumbly shortbread, not hard. My first batch was cooked as the recipe said until ‘golden brown’, don’t! When they’re starting to colour on the bottom is fine. They harden up as they cool. This recipe came from the Serious Eats website.

Makes approximately 5 dozen thin cookies ( I ended up with 2 dozen fatter biscuits rolling the dough and using a cutter) The traditional shape is a fleur de lis but I didn’t have one of those.

Procedures
1. In a stand mixer, cream together lard and sugar on medium speed until fluffy. With mixer running on low, add egg, vanilla extract, brandy, and anise seeds and mix until homogeneous. Add flour, salt, and baking powder and mix just until dough forms into cohesive ball.

2. Form dough into two cylinders about 1 1/2 to 2 inches in diameter. Chill for 2 hours or wrap tightly in plastic wrap and store in refrigerator for up to 3 days. For longer storage, freeze logs tightly wrapped for several months. Defrost in refrigerator for 1 day before using.

3.Adjust oven rack to middle position and preheat oven to 350°F. Combine sugar and cinnamon in small bowl and set aside. Cut cylinders into 1/4 inch disks and on ungreased cookie sheets leaving 1/2-inch gap between cookies. Bake until golden brown, about 12 minutes.

4.Dip rim of each cookie into cinnamon sugar mixture. Let cool on racks and store at room temperature in air-tight container for up to 5 days.

Gabriela’s Kitchen has another with three eggs

Tuda makes hers with Red Wine and Orange juice.

And a classic Spanish Recipe for Mantecados

“On the lead up to Christmas in the shops and supermarkets you will see many of the traditional seasonal foods on display. Particularly popular in the range of packaged sweets are polvorones and mantecados (small sweets/biscuits), marzipan and many different types of turrón (nougat). Normally you will see this on sale in pastlerías (cake shops) as well as in supermarkets and smaller and specialist food shops. The village of Estepa is renouned for the best polvorones.

Although there are many recipes for montecados and polvorones (which give very different results) here we present a traditional one.

In a skillet, toast the flour over low heat, stirring constantly with a wooden spoon. When you get a tan flour mix in the almonds and let it all cool.
Next churned butter until almost foaming and add the sugar and cinnamon.
Beat a little more and it is adopting the almond flour, little by little, trying to be a very loose dough.
Roll out the dough, which should take about two inches thick, and cut the dough with a  pasta cutter.
Place in a baking tray and put in the oven, which is about 150 º.
When browned, cool  and wrap in paper for a better presentation.

And there’s another on the Maholo.com site.

While you’re cooking, you might enjoy a little (retro) Christmas music. Feliz Navidad!

This biscuit was made the official New Mexico state cookie in 1989, then the legislature debated on how to spell the name. Picking one recipe is just as difficult.