When we received the invitation, we knew Regional Food had to be there. Ever since our print issue #3 we’ve had a special spot for that ridge of mountains and the narrow strip of a chaotic semi-urban life that flows along it from outer Sydney to the country and Lithgow beyond. We worried we didn’t do it justice in that issue (see it here in our ‘Electric’ version). We were chasing advertising dollars to stay alive and we simply couldn’t afford to run enough pages to use all the content we’d gathered. The pictures still look ok, but the stories don’t have much high-altitude breath in them any more.

So we welcomed the chance to update our producer knowledge and attend an event that was presented by the Food and Hospitality students and staff at the Blue Mountains College of the Western Sydney TAFE. It was billed grandly as the ‘Inaugural Local Producers and Chefs Table’, and it was an opportunity for the Certificate III and Diploma Events students and 2nd year Commercial Cookery apprentices to work with the local producers and strut their stuff for the local Chefs and tourism operators (some of whom were certainly their employers). The video gives the best introduction to the day. More fun if you were there of course, but have a look at this first.

The venue was the very functional restaurant training space they’ve called elevation 867, and it was a clear sunny autumn day. The full length windows ensured the space was bright, so bright that the light needed a bit of diffusing as the after noon progressed (which worked for the photos of the food as you’ll see – natural light rules ok?).  The professionalism and presentation in the food was very high, and with so many students serving, there was a real bustle around the tables. Food style? Well, the dessert was described on the menu as ‘Textures of Logan Brae apple with vanilla cream pearls, apple puree and meringue served with white chocolate apple crumbs and apple ice-cream’ so that gives you an idea of style, so although using local produce, this was consciously ‘fine-dining’. Crumbs, pearls, dried textures, baby vegetables and salad herbs, even baby flowers, all designed to provide multiple tastes and textures on the plate. Some of it worked and looked amazing, the salad course clearly took this photographer’s fancy (see the spoon on our cover page). The desert was a delight to Sam Edwards from Logan Brae Apples who was very pleased with the the “oohs and aahs” response as people ate. There were some slight missteps – the crisped blackened quinoa, (or was it the amaranth?) was actually too crunchy to eat. The slab of beetroot with the beautiful fillet was similarly bypassed. but there was such good feeling in the room, that no-one would be picky.

Selection of Mudgee High Valley cheese with fig jam, quince past and feijoa

There were three wineries represented – Swinging Bridge and Tamburlaine are from Orange and Windowrie is from Cowra. Jason Ward spoke as a representative from Swinging Bridge, and wine distributor Jeff Clements (Western Regional Wines) talked about Tamburlaine and Windowrie. Jeff’s company represents some of the best of the region’s small wine makers,  Farmer/Producer Paul Kingston from Lithgow Free Range Meats talked briefly about their Kanimbla Valley beef and lamb (that valley is part of the view you can see from the Hydro Majestic at Medlow Bath). The restaurant group who own Lilianfels and Echoes hotels in Katoomba, also own that iconic Hydro Majestic and proprietor Huong Nguyen announced that along with the re-development of the grand old lady, they were opening a hospitality school in one of the wings of the building early in 2014. This will be in conjunction with TAFE and the planned multiple restaurant venues in all their properties will ensure great training and employment opportunities. And it will have the best view from a classroom anywhere! 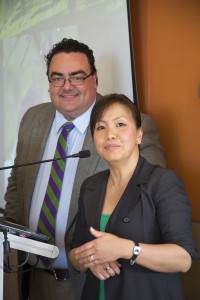 Here is a full list of Producers involved in the lunch, with links to their websites so you can follow them up.

Glenda Grice, who is the Industry Officer, Tourism Hospitality and Events explained the focus of the lunch and the key staff involved. “Our Head Teacher, Tourism and Hospitality, John Rankins, spent many weeks sourcing the produce for the lunch – which included visiting farms, attending farmers markets and meeting small regional producers.  John’s passion for all things local was certainly captured in the range of dishes served at the lunch. Director Education, Anne Goonetilleke explained that Western Sydney Institute supports sustainable fare and lower food miles in all its college restaurants through responsible practices with purchasing and waste management.  Produce of local farms is celebrated with producers functions and events such as 100 mile dinners, which are regular features of the Institute’s training restaurants.  Furthermore, Anne said the events encourage collaboration and a culture of sharing with teaching sections supporting each other with commodities and expertise and in turn, influence our students who take these good habits back to the community and industry. The Commercial Cookery teacher in charge of the kitchen on the day was: Simon Bestley.  The Commercial Cookery Students were 2nd year apprentices The Food and Beverage Teachers were: Debra Kreuzig and Rachel Hampshire and the students were Certificate III F&B Events Teacher was: Tamara Watt and the students were Certificate III and Diploma”

Thank you Glenda, and thanks from Jan and I to everyone involved in a successfully delivered regional food event. Inaugural it may be, but don’t stop now. And special thanks to Jeff Clements of Western Regional Wines  (Mob: 0400 88 111) who generously brought out a few cases of the wines that he distributes, for diners to take away.  Jeff sells Dryridge Estate wine which was featured in our Megalong Valley section of our Blue Mountains print issue. That’s the photograph below, in case you’ve forgotten how beautiful those Blue Mountains valleys are.
Fred Harden & Jan O’Connell 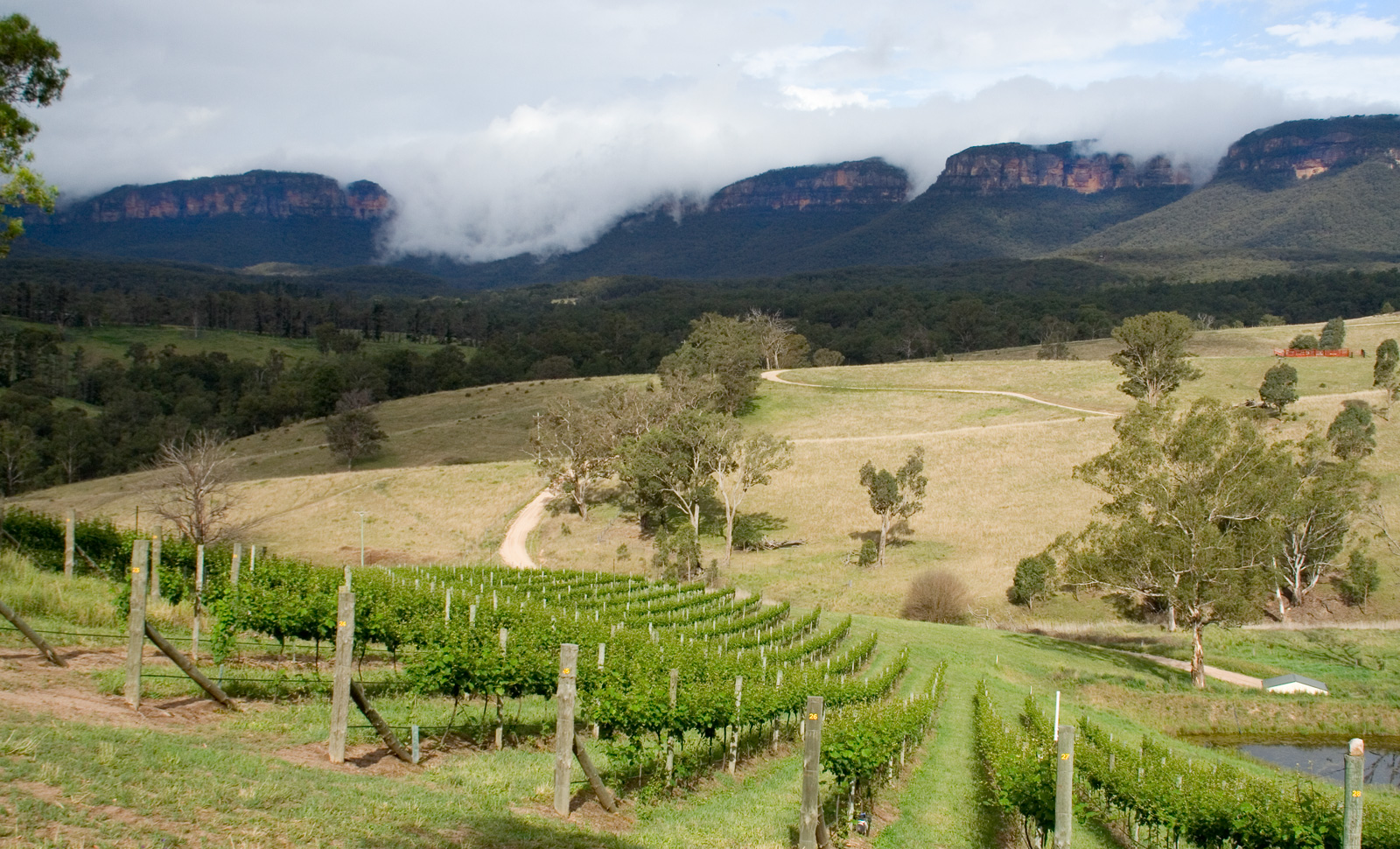 We’ve got a special love for the Blue Mountains, so when we got an invite to this lunch, we had to be there.