It threatened to rain but still there were record entries, plenty more prizes, a meat raffle and a great crowd of spectators/eaters. The 2010 Cook-off was looking a lot like a down-home version of MasterChef. Ok, a ‘very’ down home version, maybe it was more like ‘MusterChef”. 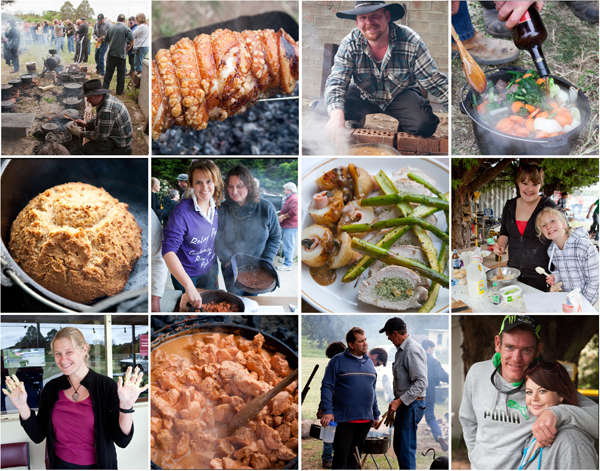 If you’ve read the previous post you’ll know the rules are simple (and Vince obviously had some fun writing them – “No lid lifting, ash kicking and spitting into other’s pots. Under no circumstances are you allowed to throw another contestant into the fire, even if they’re a right rude idiot with no idea how to cook. Read the Judges Notes to see how they will be scoring. Pay special attention to the bribes section.”) You get the idea.

The requirements are that the dish is prepared on-site, and cooked in a heavy camp-oven pot over coals, in a skillet or directly over the coals for roasts. That didn’t seem to reduce the variety of dishes and some were quite adventurous.

Particpation seemed to involve more entries from couples this year – Rachel and Patrick Falvey contributed a lamb pot stew (with the contents of half a bottle of port to add a Tawny to the dish’s name and flavour) and they made a wonderful Jaffa sponge, chocolate pieces melting in orange flavoured sponge. Paul and Popey (the entry form’s Name sections were often obscure and as a new-comer to the town, we’ve only been here for 13 years, I didn’t know many of the surnames)  cooked stunning roast duck with great crispy skin.  Children helped their parents (and quite a bit of the help went in other direction) young Troy Harriden’s entry was lighting the smoker after Dad filled it with four fat rainbow trout he caught in Lake Eucumbene, for a rum and hickory woodchip smoked trout.

There were some great entries from er, mature age cooks who had obviously practiced as grey nomads, and again some good young guns. Dan, the younger brother of last year’s grand prize winner Tom Skeehan showed that cooking runs in the family. He added a touch of class with a dish called ‘Stuff it’, roasted potatoes with bacon and anchovy inserted (in a hole he made with an apple corer) and pesto and fetta stuffed chicken breasts poached in a vegetable stock.

There were some clever names trying for extra judges points, Kangaroo Carnage, Poor Old Bess, Peter Pumpkin Soup, Grandma’s Berry Delicious Pud, Doe a Deer and Stu’s Stew (of course). It was chaotic with five of us judging thirty-five entries and the hungry crowds overtook the judging so a scraping of the pots raised some of the final dishes for marking.

By then it really didn’t matter. There’s an abrupt jump you’ll see in the video as I was too busy to film.  I heard but didn’t see the entertainment from local bands inside the club and it apparently went on into the night. I dragged myself home about 11pm.

You could tell that organiser Vince Skeehan was proud of the result and we’ve all made some suggestions for next year. Vince had gone to a lot of trouble to write out a list so that the MC could announce the prizes and thank the local businesses who sponsored them.  That came down to me in the end, and I’d have loved to have had time to read out all his notes. I learnt more about  what was happening in the town from that list then I’d find in our great weekly The Bungendore Mirror. ( ie. Scott and Kelly are the new lessees at The Royal Hotel, there’s a new board at the Bowling Club, etc.)
The video shows how the evening progressed, it really doesn’t need any further commentary from me. There’s a list of all winners and their dishes and prizes below.
Winners

The top five are in order of points, all the others scored too close to call.

The judges gave 1 point and the wooden spoon to the entry of a tin of baked beans that was, according to the rules, opened ‘on site’.

The 2010 Camp-Oven Cook-Off was a lot like a down home version of MasterChef. Ok, maybe it was more like ‘MusterChef”.