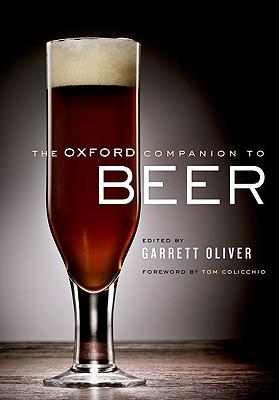 In the tradition of one of my most referred to books, the Oxford Companion to Food comes a definitive reference for beer. The blurb describes it as…

‘The first major reference work to investigate the history and vast scope of beer, The Oxford Companion to Beer features more than 1,100 A-Z entries written by 166 of the world’s most prominent beer experts. Attractively illustrated with over 140 images, the book covers everything from the agricultural makeup of various beers to the technical elements of the brewing process, local effects of brewing on regions around the world, and the social and political implications of sharing a beer.’

Have a look at the Google Preview and you’ll see that this is sure to be a definitive enough book for our great craft beer makers. The social sections will add it to the food and drink writers bookshelf as well. Editor Garret Oliver, brewmaster at the Brooklyn Brewery,  says in his preface “this book is dedicated to everyone who has stood facing the mash tun, hoping to conjure deliciousness, joyous conviviality, and a small measure of magic”

And a Mash Tun? It’s the vessel used to heat and mash the grains so they form malt. Here’s a big one, here’s a do it yourself one.