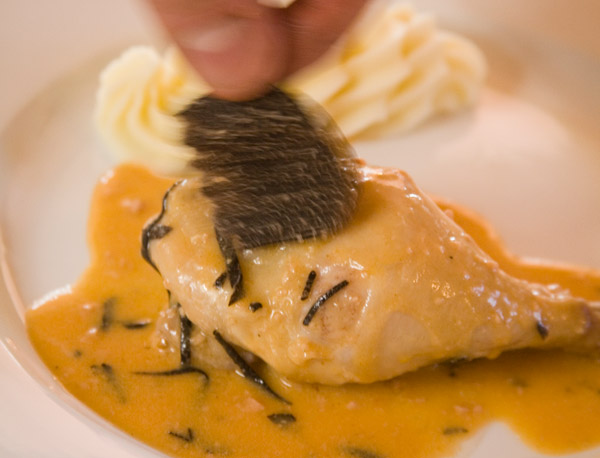 Ok, it may seem a bit perverse that this article appears at the end of the Southern hemisphere fresh truffle season but we have to put this down while it’s still fresh in our minds. We’ve just enjoyed another season of fresh truffle, so consider it a way to tempt you to have a truffle experience in winter next year.

Hopw to cook truffles? It seems that the oft repeated rule for truffles is ‘don’t’ cook them,  but as we’re professional truffle diners we don’t agree and feel we are starting to get the hang of using this aromatic black fungus. Stick with us now, this may take a while. 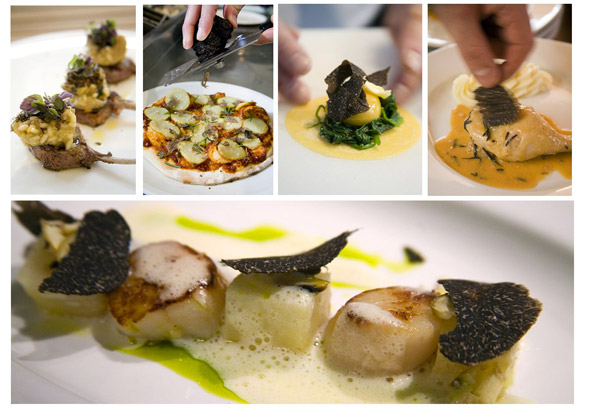 First, an introduction. The following is a short editorial piece I wrote for the launch of the first Capital Country Truffle Festival in 2009.

“My experience of fresh truffles began in 2001 on a visit to Italy, on a foodie holiday that was chosen by pointing at random in the small travel ads section in Gourmet Traveller. By delicious luck we chose Living Italy, a small company run by ex-Canberran Neil Moore and his wife Carol Searle, and we spent three weeks in Umbria, being introduced to an unabashed truffle culture. On our trips back since then it was reinforced. Claudia Roden in her book* The Food of Italy says (almost disapprovingly) that in Umbria…

“truffles are so prolific they are put in everything – spaghetti, omelettes, scrambled eggs, salads; served with fish, cheese, as a garnish for grilled meats: spread on toast and in the sauce of almost all the roast and stews. Great handfuls are used grated, chopped and in shavings … mashed up with garlic and anchovies or with black olive paste or chopped mushrooms.”

Visiting twenty years after she wrote that, little had changed. Think slices of truffle on pizza – the ultimate street food, served hot, wrapped in paper. Diced truffle in the stuffing in a charcoal roasted lamb – releasing a wonderful aroma when cut open at the table, enhancing the dish, almost like garlic. Spaghetti served with just virgin olive oil and shaved truffles. Intense clear flavours, inexpensive and available almost everywhere in the season.

Maybe these experiences have spoilt me? Well you should be spoiled too.

In Europe truffles are mostly a produce of the forests, wild harvested, and they’re only available for a couple of months. That makes them exclusive, which has lead to their place on most restaurant menus as an expensive treat. With the prestige and mystery of a premium product, the appreciation of truffles soon spread to fine dining in other parts of the world. They were made even more expensive because they’re air freighted to the New York, London and Hong Kong restaurant kitchen doors.

In a classic Old World – New World twist, in Australia and especially in Western Australia, Tasmania and Southern Highlands NSW, we’re now growing increasing quantities of high quality truffles. We’ve skipped the hunter gatherer, we’ve passed the ‘experimental’ stage and reached, it appears, a ‘commercial’ stage. But in the accelerated process we’ve also skipped the thousands of years of appreciation and any culture of using them in our cuisine. We’re learning fast.

We do know that they’re not like the ubiquitous truffle oil (which is a synthetic flavouring), and that they have a natural glutamate that enhances the flavours of almost everything they’re added to. We don’t appreciate that once dug up they only stay fresh for a week or so. And unlike the Europeans we don’t mourn the end of the truffle season.”

So without centuries of truffle culture, how do you learn how to use truffles? By Tasting >

At the end of the season we’re starting to get the hang of cooking with this luscious black fungus and we’re sharing it here.

It could happen here (if we all gave a fig)