Your own Dry Cured Bacon

The UK based Local Food Heroes Blog has a good introduction to dry curing and addresses the issues of the toxicity of the chemicals used in curing, please read it first before attempting this recipe. They also have calculator so you can match the amount of ingredients to the actual size of your piece of pork belly. It’s also their picture below (thanks, until I take mine). 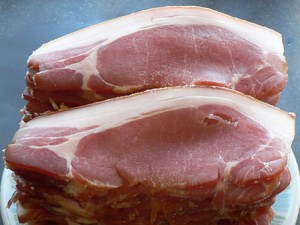 The Sydney Morning Herald Good Living had this recipe as part of  a story by Keith Austin about Adam Humphrey, the Restaurant Arras chef.  The Arras dry bacon cure recipe is for making one medium pork belly (about two kilograms) into bacon.

SMH suggest’s that you to talk to your butcher about a different cut if you are after middle (loin) bacon. Keith made a pork loin into bacon at home using this recipe and declared: “We all reckon it’s pretty good… some of the best bacon I’ve had for sure.”

The SMH recipe confuses saltpetre – which is potassium nitrite – with ‘Prague powder’ which is sodium nitrite, both work,  but as Prague powder comes also mixed with salt the quantity in the mix is different.

Mix the salts, saltpetre and sugar together in a dry bowl. Bash the bay leaves and peppercorns to release their flavour and mix into salt mix. In a non-metallic container (Arras uses a plastic box), lay a little of the curing mix to cover the bottom. Take pork belly and rub some cure mixture into all the cracks and seams really well. Place flesh-side down in the container and cover with more mixture. Cover container and chillovernight.

Next day, remove from fridge and take meat from container. Throw away used cure and replace with fresh. Repeat this process for five days. After the final: cure, remove the pork and discard the contents of the container Rinse; the pork under cold water. Rinse the container and fill with fresh cold water. Submerge .the washed pork in the water and return to the fridge.

Next day, discard the water and replace with fresh, clean water. Submerge and chill overnight. After the second day of soaking, remove, rinse and pat dry. In a cool place (the fridge, a cool garage etc) hang the bacon to dry. You can dry it as long as you like but two days will suffice. You now have your own, home-made, fresh (also known as green) bacon. At this point it can also be smoked. Remove the skin, leaving as much fat on as possible. Slice to the desired thickness, then fry or grill and make a bacon butty. Enjoy.

NOTE: The recipe is not an exact science (though the saltpetre quantity must be followed – see below). Arras suggests making double the quantity of cure mixture to be sure there’s enough for the process.

If you want to know why you’d like to make your own bacon, other than for the flavour, have a look at this video of how it’s made commercially (in the USA at least). Pre-cooked bacon – eeeeek!

* Saltpetre is sold at some specialist/wholesale butchers and online at sites such as redbacktrading.com.au (see meat processing, preserving and curing products). It should be used with great care and to the exact quantity shown in the recipe.

Saltpetre is Potassium Nitrate and was used, and still can be used, in traditional curing. It is mainly used, by modern curers, in air dried products as it is active over a long period and provides protection for long-term curing.

Prague Powder #1- This is Sodium Nitrite and is commonly used nowadays for curing. It acts to protect the meat very quickly unlike Saltpetre which has to convert from a Nitrate salt to a Nitrite, by reacting with bacteria in the meat, before it starts it’s job. Sodium Nitrite has to be mixed with salt, by law, to reduce the danger from accidentally swallowing it. It is often coloured pink so that it is not mistaken for anything else. Normally, Prague Powder#1 has 6.25% Nitrite . This has to be taken into account when calculating levels in a cure mix. The amount of Nitrite put into a product should, almost certainly, be below 200 parts per million (PPM). The British and EU rules on curing levels lack detail, many home-curers follow the USA rules, which are far more detailed than the EU and British, and generally contain accurate information on the levels of cure that must be used.