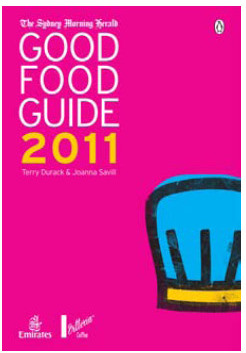 You know you’re a regional foodie when you get a press release on the awards night and skip over all the city restaurants to immediately look for Best Regional. This year it was Locheil House eh? Well done Monique Maul and Anthony Milroy.

Clearly this was the year of corrections, and no coincidence that it is is also Terry Durack’s first Guide since he came ‘home’, even though actually his seventh as co-editor, replacing last year Simon Thomsen as SMH critic and Guide co-editor. Considering that again our Regional Food favourite Joanna Saville was the other editor, it is clearly the case of a new broom. This year also shows how Fairfax are thinking about their online integration into their revenue stream. With the book you get a code for www.goodguides.com.au the combined site for The Age and Sydney Morning Herald guides. You can also get an iPhone or Blackberry app (which costs more but gives you both States guides).

Marque restaurant in Sydney’s Surry Hills has been named the Vittoria Coffee Restaurant of the Year at tonight’s prestigious awards ceremony to celebrate the launch of The Sydney Morning Herald Good Food Guide 2011.

Marque, whose owner-chef Mark Best won Chef of the Year in 2010, was also one of only three restaurants to score the top accolade of three Chef’s Hats at this year’s Good Food Guide Awards.

Co-editor of The Sydney Morning Herald Good Food Guide 2011, Joanna Savill, said: “Marque’s win is an acknowledgement of the whole package that is Marque: from elegant, highly creative cooking to careful, polished food and wine service. It’s a world-class restaurant and a reflection of the best in Sydney dining.”

Fellow co-editor, Terry Durack, added: “We also warmly congratulate all other award winners this year, especially the record number of fifteen new city one hat winners who show the true depth of the Sydney dining scene.”

Alongside Marque, est. and Quay are both awarded three coveted Chef’s Hats in the 2011 edition, while in the country, Lochiel House at Kurrajong Heights, with two Chef’s Hats, took out the Navman Best Regional Restaurant Award.

The Sydney Morning Herald Good Food Guide 2011 is the 26th edition of the book and the largest to date, with more than 950 places to eat listed.”

See the SMH online coverage here, complete with a short video of the awards night

You’ll be able to buy a copy at the newsagents tomorrow morning, unless you can convince the late night one to fish out a copy from under the counter.

Ok, skip over the city winners and check out the Regional hats. All with links.

Swimming against the (TV chef) tide