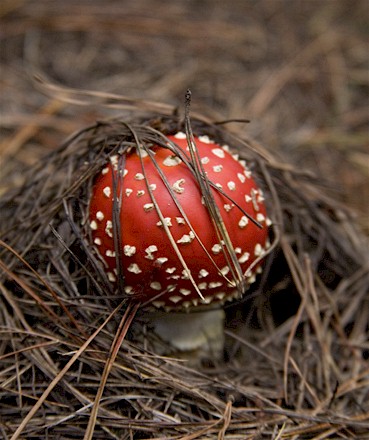 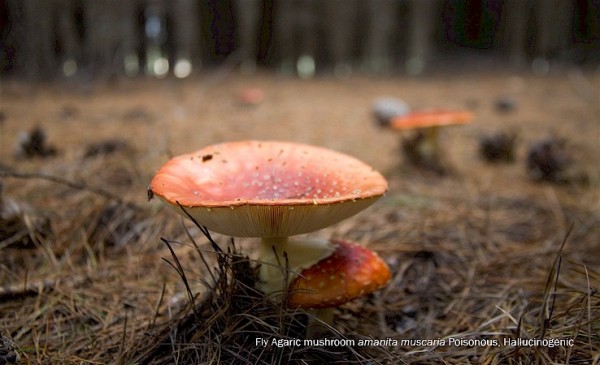 One day, deep in the Oberon pine forests…
I found these mushrooms. I do have an interest or two outside of food and wine, (the pleasure of living in the country is part of that) but usually they combine with eating. This is my confession of being a closet mycophile. I really really like mushrooms, the wonderful shapes, colours and sizes that they grow in. My photo archives are littered with them like a pine forest floor. I love the mythology and traditions (did you know that Buddha died from eating a poisonous mushroom?).

Eating them was a pleasure I discovered latter-day. As a kid, I’d pick them for my parents. The idea that this abundance was seasonally available and free, and the surprise in seeing them appear where days before there were none is still magical. (And I like the smell of them. However growing a mushroom kit in the cupboard under the stairs taught me that not everyone in the family liked that fecund mustiness. Especially infiltrating their hanging jackets.) 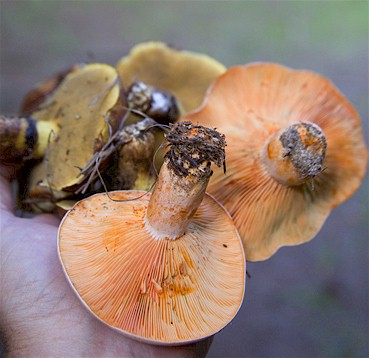 At left are the two varieties that are commonly available in autumn in the forests around Oberon in NSW. The Oberon Visitors Centre has a free identification sheet and display samples at this time of the year, that will help you make sure that you’re not eating things poisonous. If in doubt, throw it out.

The extensive pine plantations in the area were planted with seedlings from Europe and came complete with spores of these varieties. Apparently you’ll find family groups of European residents gamboling in the woods at this time of the year. I picked enough for a substantial meal that we cooked and served over polenta. Tasty

At rear is actually a boletus, with a sponge-like cap, and brown slimy skin called a Slippery Jack (Suillus luteus). In front is the Saffron Milk Cap (Lactarius deliciosus)  If you cut the stems with a knife, they can then re-grow (good mushrooming manners that I learnt too late for these.)

But it’s the beauty and danger of the poisonous Fly Agaric that attracts me. It’s a popular image. As Wikipedia points out the image of the red and white mushroom appears in lots of countries (and if you’ve played or watched your kid’s play, even as a character in Nintendo’s Mario series) . As you see from the old postcard below (it came from a voodoo site www.luckymojo.com, well worth a look ), along with the four leaf clovers, leprechauns and horseshoes it was considered lucky. I have a few tiny red and white mushroom Christmas tree decorations and there’s suggestions that the mushroom’s colours became associated with St. Nicholas, and then Santa.

The psychoactive capabilities and the folklore are all explained in the Wikipedia article. After a hippie era testing of ‘magic’ psylocibe mushrooms when I was violently ill, (trippy but ill), so I’ll pass on testing the fly agaric’s hallucinogenic qualities.  Can I pour you a glass of wine perhaps?

There’s suggestions that this mushroom’s colours became associated with St. Nicholas, and then Santa.

How to make gravy