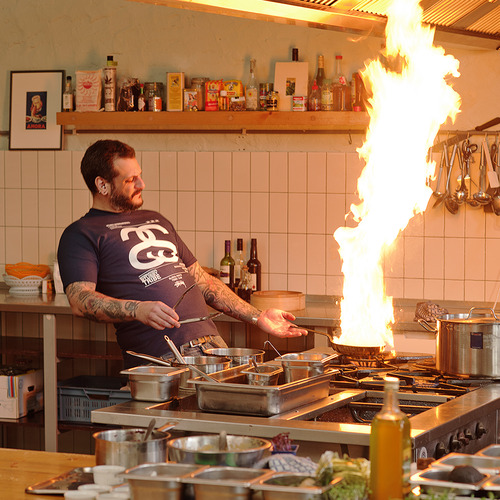 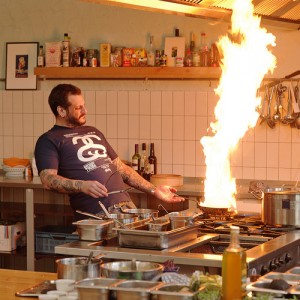 In our print issue #2, Jan O’Connell recounted a conversation with a tourist office volunteer. She was asking about the best places to eat in town (I think it was in Braidwood, NSW). Judging from his voice it was an older man who said, “Well, there’s lots of places to eat, but nothing that’s very fancy other than (a place now closed) and they serve a lot of that, you know ‘high’ food. All piled up in the middle of a big plate.” High food has become a much used descriptor in our dining travels.

If you haven’t seen it yet, I thought you’d like to see online retailer Fresh Cotton’s new campaign that is mix of High Food cooking and fashion. It promotes Stussy’s new ‘Amsterdam’ T-shirt worn by Chef Misha in the videos. For the target audience Amsterdam’s canals were less interesting than the better known street legal hallucinogenic ingredients, and here they are used in a series of recipes prepared by Italian Chef Misha Sukyas. The fashion images all have suitably trippy Photoshop distortions of the models heads and the catalogue names and descriptions look real but sound a bit twisted. You’ll find it a dedicated sub-site on FreshCotton called BAKED. If you ‘pay with a tweet’ you can download the PDF Spring 2013 cookbook/lookbook .

There are six recipes, three videos  – with ingredients I’d never heard of.  (I have now but I’m not going to swallow OK?)

322: El Camino – Veal in a Salvia Divinorum crust with Magic Truffles and Marijuana.

Clash of the Titans – A savoury cappuccino of Bali Kratom, Hashish & Baby Woodrose.

There are some ‘cookbook – like’ spice page layouts with ingredients. Along with some of the expected ones like Nutmeg, included are a couple of ‘truffles’ (Psilocybe mushrooms actually) with descriptions of the effects of eating them.

Sclerotia Atlantis (Magic Truffles)
Changes the perception of ordinary reality, seeing yourself and your environment from a new perspective. This often results in hilarious insights and a good deal of laughter. There may also be a sense of confusion, when your mind can no longer grasp what’s going on.

Sclerotia Hollandia (Magic Truffles)
Beware: the Hollandia contains twice the amount of active ingredients compared to other varieties. Effects include extra strong and nearly continuous visuals, which may overwhelm those who are less experienced with taking truffles.

Our locally grown black Perigord truffles offer a superior culinary experience, are also street legal (though with reported aphrodisiac properties). I guess I’ll never get to try the Hollandia.

FreshCotton has a Tumblr blog (where the image of Chef Misha Sukyas came from). Misha has a restaurant and teaches in Milan, and has a Facebook page that I’m sure he didn’t know the world would be looking at. He also helps out in an episode of one of the ‘Web-TV chef’ ideas that causes me some anxiety watching, the Blonde Chef. Gasp.

The FreshCotton Spring Fashion catalogue wasn’t online as I posted this(and I’m not sure that it won’t remain a little hard to find) but you can find grab it at Baked.freshcotton.com. Just click on the link in the corner of one of the videos, offer a tweet and you can download the PDF cookbook and catalogue. There are some examples on the Co-Create site if you don’t want to commit to the tweet. The videos are appearing on YouTube.

It was all created by Stussy’s agency Arnold Worldwide. Nice one. If it is an elaborate late Aprils Fool’s joke, it got me!

There’s a very careful Disclaimer (see below) of course, but you can see this will cause a, er…buzz.

Disclaimer
The contents of this book are intended for mature audiences only (age 18 and over). Viewers under 18 years of age are requested to exit this book immediately.
All substances and ingredients featured in this book were purchased and prepared legally in the Netherlands. The authors make no claim that the information contained in this book is lawful outside of the Netherlands. All information within this book is for the user’s personal entertainment and informational purposes only. No commercial use is permitted. This book and its contents are not to be viewed or otherwise accessed in any country or territory in which doing so would, or could, be deemed a violation of any applicable local law. Any and all use of the information contained herein is entirely at your own risk.
The consumption of some ingredients and substances featured within this book may result in altered behaviour. Some of the ingredients found in the recipes are known to cause reactions, which may vary, depending on the individual. The user hereby acknowledges such risk of reactions and agrees to take full responsibility for any personal or other injury or damages that may result from the use or misuse of any content, substances, and/or ingredients featured in this book.
The user agrees to hold FreshCotton Retail BV, Chef Misha Sukyas, Arnold Worldwide Partners Amsterdam BV and each of their owners, agents, employees, partners, directors and assigns harmless against any claim, suit or action, threatened or otherwise, relating to any adverse or other reactions you may experience. If you have any existing or suspected medical conditions, you are advised to consult your doctor before preparing and/or consuming any of the recipes found in this book. Do not prepare and/or consume the recipes provided herein if you are pregnant, nursing, taking medications or any other (prescription) drugs. Do not drive or operate heavy machinery and/or equipment during or after preparation and/or consumption of any of the recipes contained within this book.

In our print issue #2, Jan O’Connell recounted a conversation with a tourist office volunteer. She was asking about the best places to eat in town (I think it was in Braidwood, NSW). Judging from his voice it was an older man who said, “Well, there’s lots of places to eat, but nothing that’s very…