How curved is your cucumber? 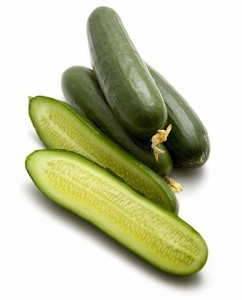 Seriously though. This is an important issue to bring to your attention. No sniggering ok? Let’s talk about how curved your cucumber is.

If you follow the overseas agricultural websites, you’ll see some discussion about curved cucumbers and misshapen fruit. Did you know there was a cucumber quality standard? It ensures that cucumbers don’t bend more than 10mm for every 10cm of length or they cannot be labeled as Class One vegetables? The European Agriculture Commission is trying to simplify 36 regulations that control aberrant items like curved cucumbers which, they believe, they could bring it down to 10 basic standards that say it can’t be, most importantly, dirty, diseased and rotten

The report on FlexNews quotes EC spokesman Michael Mann: “People are saying that prices are too high, [so] it makes no sense to be chucking food away. We want to have two classes, allowing supermarkets to sell funny shaped vegetables.” He’s right. When you consider that natural variation (at least in my garden) will happen even when you plant varieties that have been selected to be uniform. Retailers justify this as catering for our desire for perfectly symmetrical vegetables. It’s what sells.

Think about your own prejudices. How curved a cucumber would you buy? How bumpy can your apple be? How about being able to buy varieties that have real taste and aren’t grown just to fit mathematically in a packing case? What about produce that uses fewer chemicals but with an occasional blotchy patch? How about if it was cheaper?
Fred Harden    21 June2008

How curved a cucumber would you buy? How bumpy can your apple be?

Try it just for one day.