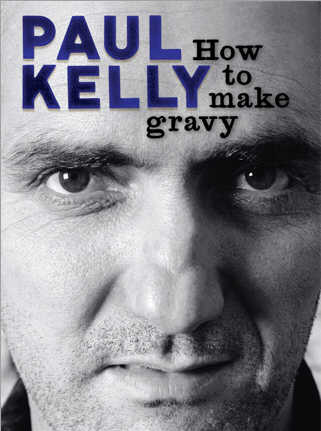 How to make gravy 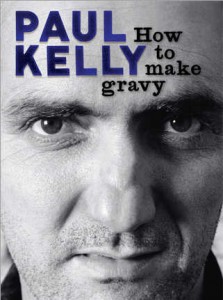 This book sent me to troubled sleep on more than a few nights when I bought it a month or so back. Paul Kelly has always been a favourite singer-songwriter yet I don’t think I’ve ever seen him perform live other than one afternoon in a Carlton pub in his ‘Coloured Girls’ era. The troubled sleep came not from boredom but from the resonance, as he nailed accurately the Melbourne I knew when I finished photography school and moved out of home. I recognised many of the people and places, and it gave some legitimacy to the arty, film co-op, alternative music, protest scene of the 70’s and 80’s that I joined in with. (And it made me appreciate the images and film in my archives recording it all.)

It’s sometimes an indulgent book, what he calls “a mongrel memoir’, but Kelly has earned the right to indulge. It is based on the stories he tells at his A to Z concerts with his songs alphabetically performed over four nights, there’s a disarming collection of  – lists, nice writing,  ‘on the road’ stories and the sources of inspiration for, and insight into his song-writing. It’s all laid out without pretension. On the CDs which Kelly calls ‘demos’ (they’re simple with one or two instruments), there’s enough good music in amongst the purely pop songs to make a journey or two from Bungendore to Melbourne on the Hume Highway pass without pain. You’ll be pushed to go to the versions recorded with his various bands.

I bought the book first, then the CDs (missing out on the discounted package deal) and if I had an iPad/Pod/Touch I’d certainly buy the iTunes app that shows a sample of how Kelly wanted them to all work together.

But for a foodie publication the question is how do you make that gravy? That comes in a song about a guy in jail apologising that he’ll miss Christmas with the family (yeah it’s a classic country song).

I guess the brothers are driving down from Queensland and Stella’s flying in from the coast
They say it’s gonna be a hundred degrees, even more maybe, but that won’t stop the roast

Who’s gonna make the gravy now?
I bet it won’t taste the same

Just add flour, salt, a little red wine and don’t forget a dollop of
tomato sauce for sweetness and that extra tang.

Kelly was asked to contribute to a charity CD of carols and Christmas themed songs for the Salvation Army.  He asked if he could record  ‘Christmas must be tonight’ by Robbie Robertson and the Band but it had been ‘claimed’, so he suggested writing something original.

He tells the story…

“I made most of it up as usual, though the general atmosphere is a lot like our Kelly Christmas gatherings, where there’s generally a large and diverse cast, the odd stray, new and old flames, gossip, singing, and much discussion and planning of food before, during and after the celebrations. The gravy recipe comes direct from my first father-in-law.

I rang Lindsay (Fields, who was organising the collection. RF). ‘I have a Christmas song’ I said, ‘but it doesn’t have a chorus and it’s set in prison.’

‘I better come over and have a listen.’

The next day he sat in my small back shed while I played it to him, my head down, partly from nerves but also to read the fresh-scratched lyrics in my notebook on the floor. When I looked up at the end he was holding his hanky.

‘I know,’ he replied, wiping his eyes. He said he loved the song but still had to take it to the board (who were more inclined to Little Drummer Boy and Good King Wenceslas and such) for approval.  He did so and got it over the line, God bless him. I’ve been playing it ever since -Lent, Easter, midyear, All Souls’ Day, Advent’ whenever.

A few years later Lindsay approached me again for the Salvo’s. This time I got in early and put in my dibs for ‘Christmas must be tonight’ . That’s the great thing about Christmas. It comes around every year so you always get another shot.

Excerpt trom ‘How to make gravy’ by Paul Kelly Published 2010 by Hamish Hamilton (an imprint of Penguin Books). Hardback 568 pages.