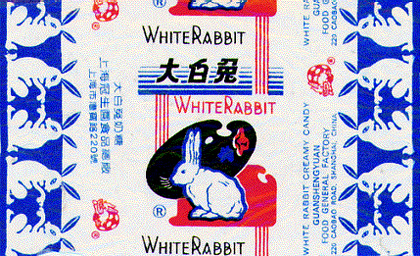 White rabbits’ is a traditional thing to say at our house when you wake up on the first day of a new month. But only if you’ve not said anything else to the person. It’s an innocent enough little ritual (“a pinch and a punch, first of the month” is a bit rougher). But this coming month it might have a less friendly overtone. As the TV and newspapers have been pointing out, there’s a warning that the Chinese White Rabbit sweets on sale here are made with possibly contaminated milk. The food sites have been covering the implications of the addition of the chemical melamine that has been used criminally to boost the protein levels in watered down milk in China. You’ve probably seen that huge NZ dairy company Fonterra own part of one of the milk and baby formula companies that are implicated. The adulteration has lead to thousands of hospitalised babies and growing numbers of deaths. A string of other products that have used the contaminated milk are also being recalled.

The description on the manufacturer’s English website says (complete with some Chinglish words and spelling) “White Rabbit Creamy Candy is made from granulated sugar, starch syrup, fresh condensed milk, pure butter, high quality milk powder and gelatin by advanced processes. It has already enjoyed a high reputation abroad for nearly 45 years for its strong milk taste, moderate sweetness, soft and smooth body and rich nutrition. This products is very larruping that the candy’s surface is covered by a very thin velamen made of sticky rice can be eaten. People always are interesting in the sticky rice velamen.”

I’ve always liked the White Rabbit wrapper (and its contents). The repeating side border with slightly sinister rabbits pointing at each other, the artist’s palette and its shadow pincers. Is that a brush on its nose? Look at the hand lettered typography of the word Rabbit! (The Flash video on the sweet’s Chinese language website now also looks a bit scary.)

I guess that’s the end of my larruping until I’m assured by FSANZ that it’s safe. The news that the Chinese govt. hushed the milk contamination so as not to disturb the Olympics should be widely condemned. Unfortunately the issue will be still there when you wake up tomorrow.

White Rabbits, and the addition of the chemical melamine that has been used criminally to boost the protein levels in watered down milk in China.

Try it just for one day.