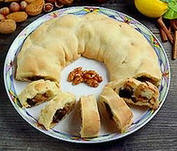 Carol Searle and Neil Moore run Living Italy, a wonderful tour company with food and culture trips designed ‘for thinking travellers’, and centered in Montefalco in Umbria, Italy. We took a Living Umbria tour in 2001 and visited again in 2007. Carol has a newsletter that will keep you updated with tour details, and contains treats such as this recipe from a Christmas message.

In the best of Umbrian traditions we invite you to eat your heart out with this traditional Christmas sweet – one that is prepared in our cooking classes.  Buon Appetito & Buon Natale!

Wikipedia (there’s a Google translation of the Italian entry here) suggest this is a “Traditional Umbrian dessert and called Rocciata in Foligno, Assisi and Spello but in the mountains surrounding Foligno it is known as “attorta“.  In the town of Trevi it is “ntorta“. The Rocciata dates back to the ancient Umbri: the Eugubine Tables describe a ceremonial pastry similar to the Rocciata and used during holy rituals dedicated to the god Hondo Cerfio. Its name comes from roots that mean ‘castle’ and ‘twisted’. Because of the similarity with the “strudel”, there may even have been some gastronomical influence of the Longobards who used to have their own duchy in this area during the High Middle Ages. The period in which this is typically prepared is from late autumn to the end of ‘ winter , this is due to the presence in the market of fresh walnuts, which are the basic component. This is a cake that can be found throughout the year (excluding summer), but it is typical of autumn and until the month of January, in particular, prepared for  the feast of Saints and the Dead (All Saints day). 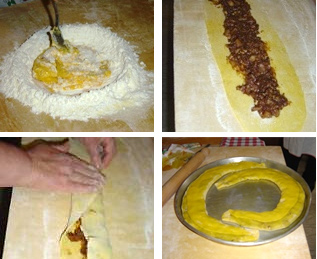 Make a fine pastry with the flour, egg yolks, sugar, oil and salt.

Mix well with as much water as is necessary until a soft dough has been formed.

Roll into a very fine layer and place in the centre the apples, the sultanas, pine nuts, walnuts. chocolate chips, chocolate powder & cinnamon.

Roll the rest of the pastry over the contents to form a tube then shape the dough into a horse shoe crescent shape.

Place in the oven for 40 mins.

A traditional Christmas sweet from Umbria in the heart of Italy.