Yeah, it’s time to leave our lovely country house and we’re cleaning up ready to put it on the market.  So we’re a bit distracted for online posts for a while.
Part of the process is we have to CLEAN THE SHED. And that involves throwing out all the old things that I’ve held to my heart for long enough.  The boxes of possum piss soaked magazines that were source material for a “definitive media history of the transition to creative computing” have been pitched out with just a small pain of regret. In the process I’ve found things I’ll never throw away and must somehow find space in a small apartment in Melbourne.

There was a box of CoEvolution quarterly magazines, clearly an influence on what I thought a magazine could/should be. Advertising free, so able to be critical and socially conscious. Every issue had a financial report to show you where your subscription or purchase dollars went. One of the covers lept out of the carefully sealed box and I’ll share it here. (You can (looks broken as of May 2021) buy this issue and the others, as a PDF here.) Cover artist Robert Crumb is  part of my visual education and has lasted longer than a 70’s infatuation.  That’s him in the hat, being carried away clutching one of  his luscious big thighed women.

The best documentary I’ve seen about Robert Crumb is by Terry Zwigoff, it’s just called Crumb and was made in 1994. It had a theatrical release in Australia. It’s highly recommended.
There’s a full length so-so copy of a BBC documentary made 7 years earlier that’s on YouTube. Unless copyright take it down.

And there’s the Official Robert Crumb website where you can buy many of his famous images as posters and prints, and some of Crumb’s great personal artwork. 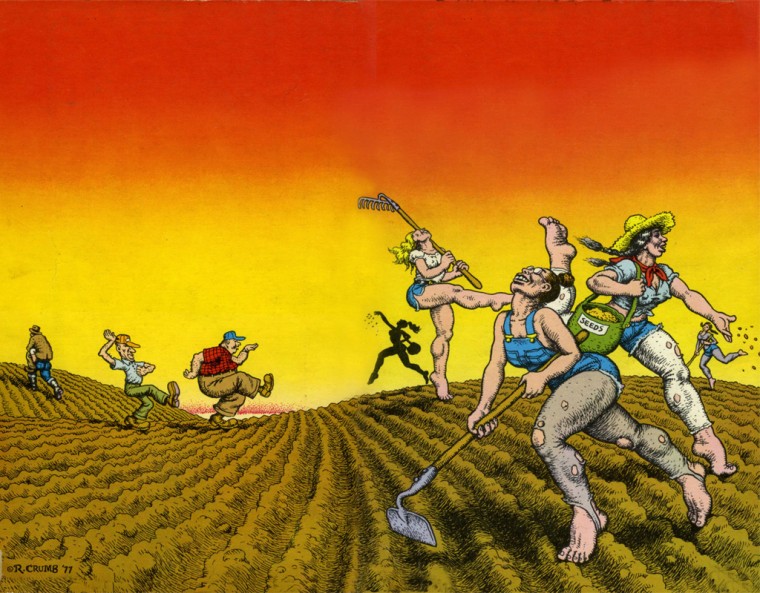