Mark Bittman - a vegan until six 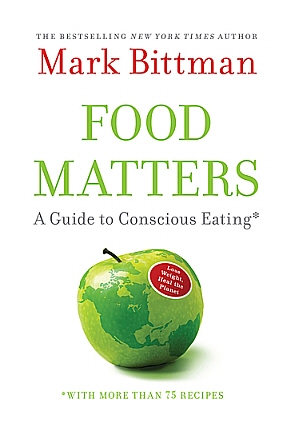 hank you Michael Pollan, now I’d like to call Mark Bittman to the stage.
Bittman is the New York Times cookery writer and his blog is in my bookmark list. There are lots of bookmarks in my list and because it’s USA centric and New York cool, I don’t get to it often. I was prompted to revisit by a review in Malcolm Jolley’s Toronto based Gremolata (which I do visit often).
Bittman’s new book has the clever double meaning of ‘Food Matters. A guide to conscious eating’. The Gremolata reviewer said about the book.. “There is much emphasis on vegetables, which is becoming Bittman’s signature. In his NYT column he chronicled his conversion to being a “vegan until six”, eschewing meat, sugar and refined carbs during the day, and eating whatever he felt like at night. It worked for him: he lost his excess weight and feels great. And there is both a commonsensical logic and a comforting nod to pleasure in his prescription. This book seems to be more about before six than after, but that’s ok, that’s the point of the thing.”
That ‘vegan ’til six’ idea had me hooked and I thought you should know more about Mark Bittman too, so I’ve collected some links and ordered the book.

His website for How to cook everything his best seller
Interview in Gremolata
His video What’s wrong with what we eat a great TED presentation on YouTube
His New York Times Column ‘Bitten, Mark Bittman on Food’
Our link to this book on Amazon (doesn’t cost you any more but we get a dollar)
Fred Harden. 6 February’09