“When are we going back to San Francisco?” Mike asked. When I sounded vague he said “To shoot the cheese story! Didn’t you see the link in my last email”. Now I have and in the process I’ve discovered Gordon Edgar, the Chelsea Green website, their  Chelsea Green TV, so I’m sharing that all around. There’s a shorter version of this video but, if you’re into cheese, watch the half hour version below. There’s a few mundane cutaways to stills, (Yep, that’s a Velveeta pack alright. Gee.) but it’s a good cheesy story and Gordon attacks a few terms like ‘artisan’, grass fed dairy, and tells you when it’s ok to use lots of adjectives to describe a special cheese. Otherwise, it’s just, well, cheese but some is clearly much more interesting than others.  I’ve included a brief section below that gives you a sense of his realism and activism, if the video hasn’t already impressed that on you. 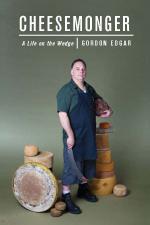 Ok, now you’ve met punk rocker Gordon Edgar you’ll need the link to his book and publisher. The book was released early in 2010 and thanks to Google books you can read it, in snatches, in this preview here. You can also visit the Rainbow Grocery Cooperative that he talks about.  And you’ll probably need to follow his blog, Gordon Zola.
(See, give me a link to a good story and I won’t let go.)
Also in order, here are links to the the US cheese makers Gordon talks about (around 9 mins 19 secs into the video).
Nicasio Valley Cheese Company Nicasio Square
Wisconsin Sheep Dairy Cooperative  Dante
Jasper Hill Farm   Winnimeer
Sweet Grass Dairy  Green Hill
Rogue Creamery Rogue River Blue
Roelli Cheese Haus Dunbarton Blue
and The Oregon Cheese Guild
Jasper Hill Cellars was the subject of a section of Ben Hewitt’s  excellent ‘The Town that Food Saved’.

One incident early on in my cheese days really crystallized my view of the cheese-selling world, and I think back on it often as I work the retail floor. A customer was picking through the cut pieces of Parmigiano Reggiano. Finally she found one she liked and tried to hand it to me over the counter. “I’ll take this one,” she said, “but can you cut off the rind? I don’t want to pay for the rind.” I immediately shifted from the open palm, I’m-here-to-help-you position to the hold-it-right-there, talk-to-the-hand one. I wanted to make sure I understood what she was saying. I told her that our prices reflect what we pay for cheese and that we pay for the rind. I explained to her that Parmigiano Reggiano rinds are great additions to soups, as well as their perfection as doggy snacks. But nothing I said would sway her. “I don’t see why I should have to pay for something I don’t want.”
“Ma’am,” I said in an ad lib that I have now been using for a decade, “we all share the rind.”
It was a reflex resoponse, but truer than most things I’ve ever said. Our pleasures and our trials are interconnected in this world. Without preserving farmland, you won’t be able to go to an urban store and buy fancy cheese. Without affordable housing, there will be no people to milk the cows and no cheese workers to cut and wrap your cheese choices. Without a safe, healthy and accessible food supply, that piece of fancy handmade cheese will become even more of a luxury. And even more rare.
Sometimes you can’t have the good cheese without taking home some rind, too.

Gordon Edgar from Cheesemonger, Life on the wedge.

(Did you pick up Edgar’s name for an organic chicken farm, Left Wing Chicken? The name’s so good I want to turn chook farmer just to use it!)

A tip of the glass to Michael Plane, again.