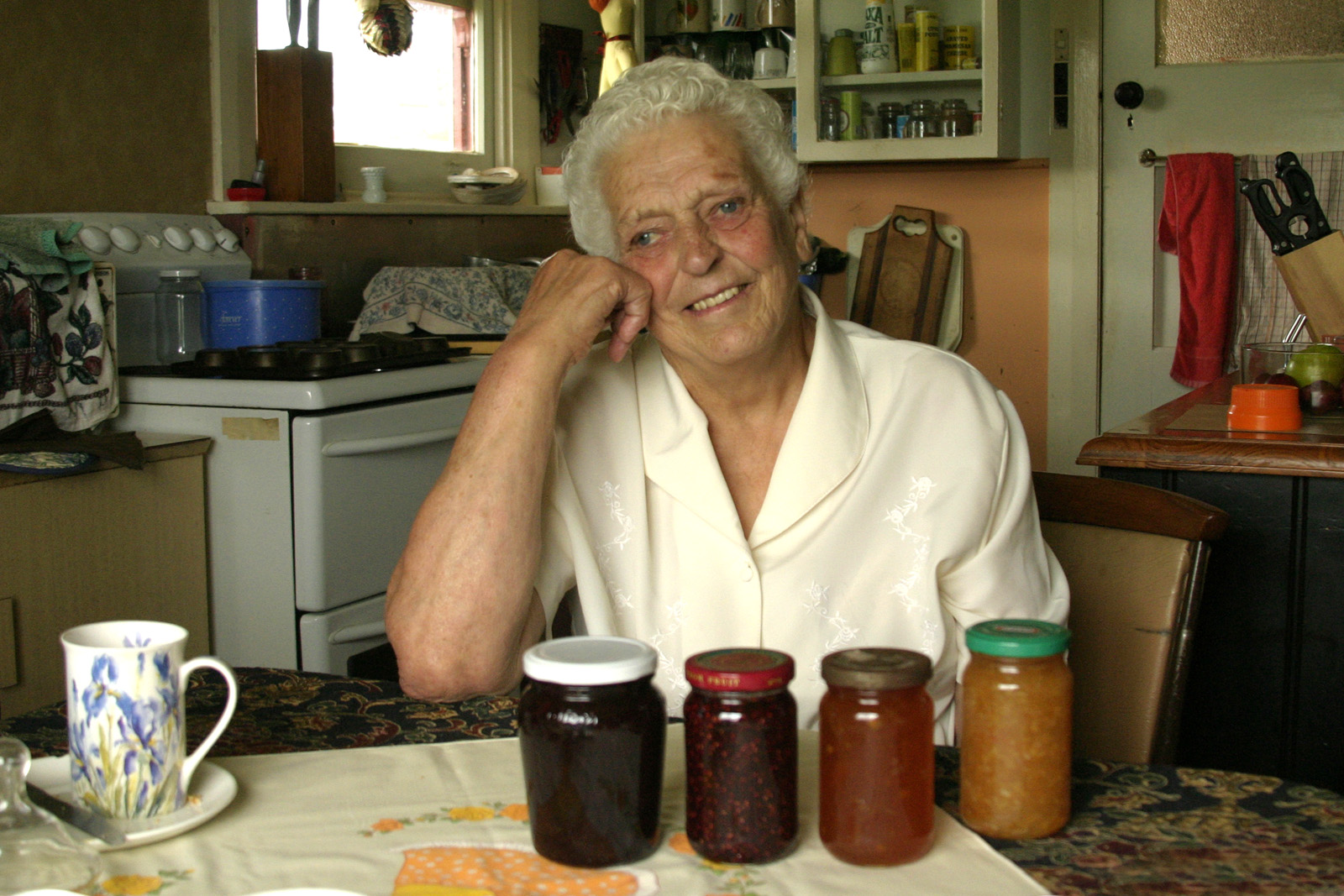 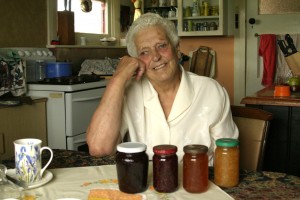 Think country. Think country women. Think self sufficiency and growing your own vegetables and fruit. That’s the way it is on King Island today, as it has been for over a hundred years. Oh, those women also milked, delivered calves and worked on the properties, but the traditional home produce was made by King Island women. They produced it for their families, their friends and, on a Friday, at a stall outside the Post Office, they still sell their jams, cakes and preserves for charity.

Picking one representative Island jam maker proved to be a religious choice. You see, the stalls are run by the churches, the Catholic and Church of England. They take alternate Fridays and I’m sure, ecumenically, they support each other. But you are warned to be early – the cakes had all sold in the first hour on the day I was there, but there were a few jams left. Sister Marlene’s jam.  Now, I knew about Sister Marlene’s jam, and had met her when, on an earlier visit, I had successfully bid for a box of assorted preserves as a contribution to King Island’s  benefit auction for the 2004 Tsunami. I happily paid the excess baggage to bring them home. They were good preserves, with lots of variety (even if there were doubts about some modern and ‘tropical’ sauce variations that included pineapple pieces). But as I asked around the advice was repeated, “for traditional jam, you have to talk to Mrs Perry. That’s ‘old’ Mrs Perry who makes her jam for the Church of England stall”. The Perry clan is one of the island originals and there’s more than one Mrs Perry.

I finally negotiated an invitation to visit ‘old’ Mrs Perry through her granddaughter Janice, who was working for Stephen Russell at the Grassy Club. I picked Janice up from her home and she tumbled into the car still half asleep, hair tousled.  Janice called “Gran!” from outside at the homestead back door and we entered the darkened kitchen. Mrs Perry was creaming the butter in a bowl for some scones ready for our visit. “Oh, you’re here” she said, dusting off her hands, and without a moment’s hesitation switched tasks. “Well these won’t be ready for a while so what about I heat up some of these plum muffins?”. She slid a tray of muffins, heavy with large pieces of soft fruit, into the oven. She then began making a pot of tea and we started to talk jam.

Do you stir?” Yes of course, I replied. Diligently.
“Ha”, and there she had me.

I cautiously professed some jam making experience and was immediately interrogated “You don’t skim the froth off your jam do you?”  No, I was lazy I said. “Good, that’s where the pectin goes. Do you add salt?” Er no, I replied. “Well you should, and a knob of butter”. “I like to weigh things carefully,” she went on, “you need extra sugar if the fruit is really wet. Do you stir?” Yes of course, I replied. Diligently.  “Ha”, and there she had me. “I never stir, too much trouble. I just use this” and, handled as if it were some talisman, imbued with powerful kitchen spirits, Mrs Perry produced an old ceramic milk-saver. “I used to have a good metal one, but it’s lost somewhere,” she said turning the tortoiseshell patterned disk in her hands. “Just put this in the bottom of the pan and you can forget stirring.”

As a child I remember my mother used a white ceramic milk-saver. Placed in the bottom of a saucepan of milk, the ridges catch the heated bubbles and the heavy disk rocks around noisily, keeping the milk moving. But I’d never heard of it used for liquids as thick as jam.  My raised eyebrow must have given me away because Mrs Perry went on as if to reinforce the argument, “My sister phoned one day as I was making laurel jam”, and, in an aside, “that’s the English laurel, they’re poisonous unless cooked, we used to be able to buy the fruit for a penny ha’penny a pound back in Hobart. Well, I was chatting on to her and she asked what I was doing, I said I was making jam and she said, ‘oh, I’ll get off so you can stir it before it sticks’. I just laughed.”

I photographed the jam, the milk saver and Mrs. Perry and, as the kitchen was filled with a few more family visitors, I offered my place at the table and we took our leave.

Fresh fruit has always been saved for the times when there’s none, by making jam and preserving. In a time when supermarkets carry produce all year round, there still has to be something special about making jam in a season of plenty from produce you have grown yourself. I’ll find myself a ‘milk-saver’ and next year, Mrs. Perry, I’m not going to stir.

This first appeared in our print Issue 1 King Island

Picking one representative King Island jam maker proved to be a religious choice. But as I asked around the advice was repeated, “for traditional jam, you have to talk to Mrs Perry. That’s ‘old’ Mrs Perry who makes her jam for the Church of England stall”.

Pigs is pigs and jam is…