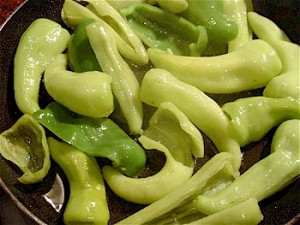 When bell peppers/capsicums are cheap, or the garden gives us a glut (I wish) it’s usually at the end of the summer and salads season, so we think about cooking them. One favourite is to bake or grill (broil to US and UK cooks) them, then peel and serve them cold with olive oil, pepper and salt. The other is this recipe.

There are a number of Neopolitan recipes that use roasted peppers, peeled and simply fried until the texture is creamy, adding hot red pepper flakes, salt and pepper. Sometimes they’re combined with tomatoes and onions. The following recipe is a bit more complicated but retains more of the capsicum flavour.
Spaghetti ai peperoncini verdi
From Bugialli on Pasta by Guiliano Bugialli, published by Cameron House

I packet of perciatelli, bucatini or thin spaghetti

Soak the peppers in cold water for 30 minutes. Take out stems and seeds if they’re large ones.

In a heavy skillet or pan, heat oil to warm and add the drained peppers. Cover the pan and leave for about 15 minutes, turning the peppers so the blacken on all sides. They should be cooked but still firm. Take the peppers out with tongs or a strainer spoon and add the tomatoes and garlic to the juices in the pan.

Cook the tomatoes for 25 minutes then either blend or put through a fine strainer (mill to you American’s) or in a food processor. Pour the purée back into the pan, put the peppers back in and put on a medium heat.

Add the basil leaves and salt and pepper to taste and simmer for about 10 minutes. Add the cooked spaghetti to the pan and toss for about 1 minute more. Transfer to a warmed platter and serve.

Variation: This is one of those recipes that if you’re comfortable in departing from the traditional recipe, try adding grilled and peeled red capsicums. While they taste quite different to the green, the nice part of this recipe is the textures. The creamy peppers and the smooth tomato sauce that sticks to the spaghetti make this popular at our place. 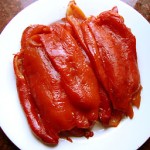 You can put the peppers in a roasting tray in a hot oven for about 40 minutes, or lay them on foil and put them under a grill, turning often. The grill gives them a smoky taste that stays when you peel off the burnt skin. The oven has a milder flavour.

The only trick in it all is getting the skins off. You do this easily by putting the peppers in a plastic bag and letting them cool. The skin sweats off and peels, almost brushes off.