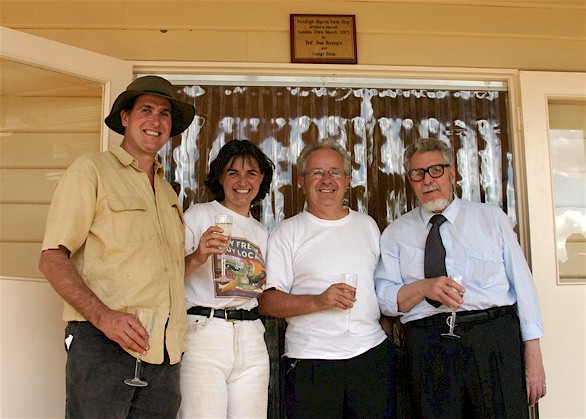 Swimming against the (TV chef) tide

While I was putting the restaurant links together for this  The Age Good Food Guide Awards piece, I read through a pile of posts on the Sunnybrae Restaurant and Cooking School blog. Although few have an individual name attached, just “Sunnybrae and all who sail in her”, this post is clearly from George Biron and attached to an explanation of the thinking behind the Sunnybrae cooking school.

It struck a chord or two. I have a lot of respect for George whom we met at Fiona and Nicholas Chambers’ Fernleigh Farm Open Day (and official opening of their Farm Shop) years ago. There’s some video somewhere of George cooking roasts for the event.

Read the whole post to get the context, but George says

I must be swimming against the tide. The current spate of cooking shows like Masterchef and such have added a very commercial style competitive edge to home cooking. Commercial television has made us believe that everybody wants to cook like a fashionable restaurant cook, and call themselves a chef?

These commercial television shows survive on subliminal product placement and blitz marketing of the advertisers. If you think that it’s about getting young people involved and interested in cooking then I believe you have fallen for the spin. Celebrity chefs are also used to add a level of credibility and mystique that is tempered abruptly as the next Coles ad segues into a reinforcement of the last 6 product placements you just saw. It’s no use filtering out the ads as they are deeply positioned into all the content. Then there are also those annoying ads’ purporting to sell processed food as “Restaurant Quality”. Sadly the double meaning is more often the case. It used to be “Home Made” but that meaning has also been corrupted long ago. I like television but most of these competition style shows are just so humourless. The only one that works for me is Iron Chef. I long for a cooking show equivalent of Rockwiz, even the Coopers ads have style.

“I long for a cooking show equivalent of Rockwiz” George Biron, Sunnybrae