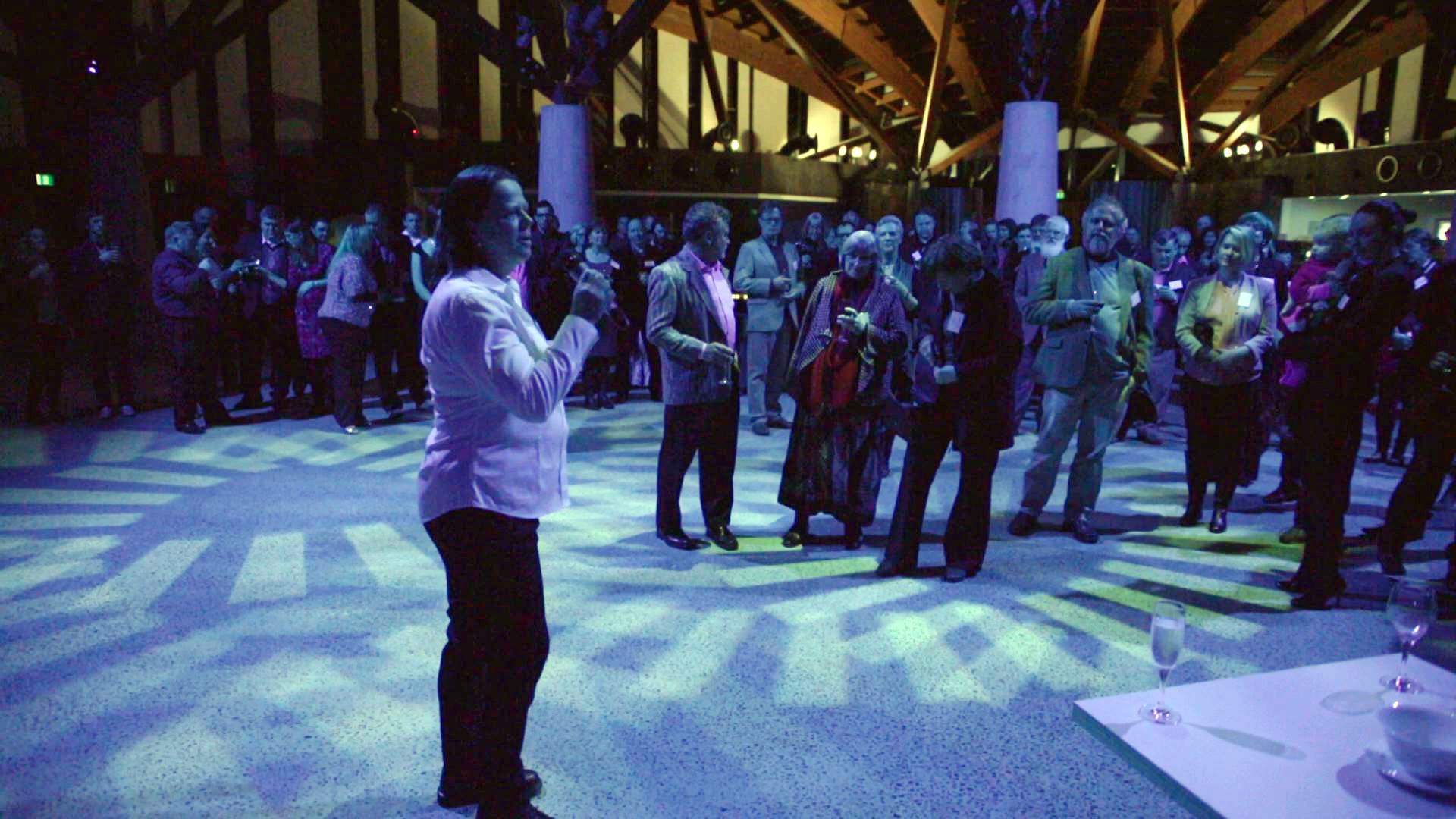 Janet Jeffs is a regional food hero and you’ll find her mentioned often in and around our website. Her Ginger Catering enterprises are very popular with Canberra foodies. And she’s very particular about the produce she uses. She’s started breeding Wessex Saddleback pigs at her weekend farm in Redesdale, NSW and has worked with, and always supported, our organic farm friends Michael and Joyce at Allsun Farm.

Now she has a stunning new restaurant.  It’s at the National Arboretum, high above Canberra in the (2003) bushfire-ravaged hills next to the National Botanic Gardens. The restaurant, in the architecturally exciting Arboretum building, opened a while ago in a school holiday period when they were too busy for a ceremonial launch. So, tonight was the night – and the video gives you an idea of the Arboretum space and a snippet of Janet’s speech. In the (at times scary) changing coloured lighting, the food looked dreadful but as you’d expect, it tasted fine. The drinks flowed for everyone except the designated drivers, who were conscious of navigating their way back down the hill. It’s much more friendly in daytime, and as the surrounding 100 forests grow, the venue will be one of the places you must see in Canberra.

The restaurant is in one corner of the arched open space (you really can’t see it here in the video) and is only open for lunch, and for weekend breakfasts. That lets it take full advantage of the hillside views (although the freeway lights in the valley at night were pretty special, so I’m sure it will become a popular function location).

Janet talked about her early years cooking for Maggie Beer at the Pheasant Farm in the Barossa Valley, and the opening of her small fine dining Juniperberry restaurant in 1995. In a partnership, Janet established Ginger Catering at Old Parliament House, opening the Ginger Room there in 2004, and hasn’t seemed to stop since.

As Janet finished her speech, I was left hoping someone someone would respond with an acknowledgement of her importance to Canberra’s food scene for these last twenty-two years. I kicked myself a bit behind the camera that I didn’t even call for three cheers. So I’ll have to say ‘thanks Janet’ here – and celebrate with a couple more videos (below).

We’ve recorded a few of the popular events at Janet’s Sunday ‘Talk and Taste’ lunches every month at The Kitchen Cabinet. They’re held in the grand Members’ Dining Room at Old Parliament House. Here’s one showing the meal at one of the Growers events featuring the school gardeners and produce from Berrima Primary School, and Allsun Farm’s vegetables.

And in this video, at the Allsun Farm Organic Spring Fair, Janet was roasting one of her rare breed pigs and with the help of Marty Boetz from Longrain, serving up some great takeaway pork rolls.

The images in the slideshow at the top of the page show the arched space, the evenings guests, Ginger Catering staff, and a small girl who chased the moving patterns around the floor all night. The huge space had that kind of magic. Outside, the view from the car park is towards Mount Painter, a landscape feature I’d ignored in daylight from street level, but backlit by a city glow – was magic for me as well.

Janet Jeffs is a regional food hero and you’ll find her mentioned often in and around our website. Her Ginger Catering enterprises are very popular with Canberra foodies. And she’s very particular about the produce she uses. She’s started breeding Wessex Saddleback pigs at her weekend farm in Redesdale, NSW and has worked with, and…