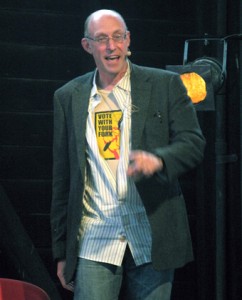 We followed up our mention of Michael Pollan in a past blog about his book In Defense of Food (and of course there was the review of Omnivores Dilemma in Issue3) by going to see him in person. He was speaking at two sessions at the 2008 Sydney Writers Festival. There were a car load of Pollan groupies – Jan and I and Joyce and Michael from Allsun Farm (see their story here), and we left in the dark and headed up to Sydney.

Because he’s now one of my food heroes, I was a bit  disappointed that he was avoiding being too controversial in his media appearances in Australia. He’s obviously loved by the ABC and was interviewed on radio and TV.   In his one-on-one Festival session with Caroline Baum, Pollan was less guarded, even dropping some expletives into the conversation as he talked passionately about the things that matter to him. Maybe it’s just that he reinforces my prejudices so eloquently but the general audience mood was of fellow change the world travelers.

By contrast the later Writers’ Festival panel discussion called Cafe Scientific: The Future of Food again being recorded for the ABC, was disappointing and saw him hold back from challenging his other panelists, Mark Adams, Dean of the Faculty of Agriculture, Food and Natural Resources at the University of Sydney and Ingrid Appelqvist who is team leader for CSIRO’s ‘designed’ food research program. You could tell he was being polite.

The Sydney Writers’ Festival has just folded in its end papers and amongst the many visiting writer celebrities, one American received a lion’s share of the media attention.

If you’re an ABC listener and viewer you would have encountered Michael Pollan on a number of programs (the ABC is a bit like that), yet Pollan always refreshed his presentations in an entertaining manner. He sounds so sensible you can’t help but like him. But then he is talking about something that touches us all. Eating.

It’s a topic of interest not immediately obvious from just reading his academic credentials. Pollan has been a journalist for twenty years and is now the Knight Professor of Journalism at the Graduate School of Journalism at UC-Berkeley. The ‘Knight’ title comes from Pollan’s role as the director of the Knight Program in Science and Environmental Journalism.* So he’s now a science journalist (an appellation that he says surprised even him).

While he was avoiding being too controversial in his media appearances in Australia, in his one-on-one Festival session with Caroline Baum, Pollan was less guarded, even dropping some expletives into the conversation as he talked passionately about the things that matter to him. By contrast a later Writers’ Festival panel discussion called Cafe Scientific: The Future of Food being recorded for the ABC, was disappointing and saw him hold back from challenging his other panellists, Mark Adams,Dean of the Faculty of Agriculture, Food and Natural Resources at the University of Sydney and Ingrid Appelqvist who is team leader for CSIRO’s ‘designed’ food research program. You could tell he was being polite.

Pollan is an English graduate, and worked as a journalist on the iconic New York Village Voice and was executive editor of Harper’s magazine at a time of its growing political influence. While he may be surprised to be called a science journalist his grasp of the sciences and botany are evident. And his explanation of them to a wide audience is clear and approachable.

If you are a groupie and have followed Pollan’s publications from his 1991 book, Second Nature, through the Botany of Desire to Ominvore’s Dilemma and this year’s In Defense of Food, his public appearance in Sydney was confirmation that he is becoming an important figure in the discussion of the ethics and politics of food. This development is apparent from the books and many magazine articles. He’s a regular writer in the New York Times Magazine.

Second Nature: A Gardener’s Education is really just an expansion on essays he wrote for Harper’s Magazine and the New York Times Magazine. Written while he worked at Harper’s  it “chronicles his growth as a gardener in Connecticut’s rocky Housatonic Valley. This book was drawn from Pollan’s experiences as an amateur gardener over a seven year period. He says he enjoys the way that working in the garden gives you time to think about things. These are not profound essays but there are entertaining tales of this boyhood and reflections on growing up in American suburbia. In one he realises that the weeds and animals in his backyard garden plot (adjoining a forest) are actively trying to return the plot to a wilderness state.

In his talk in Sydney talk pointed out that American’s have lots of ‘guide books’ of how to deal with nature as wilderness (like Thoreau) but few that talk about the coevolving place of humans with our modern agriculture. (He mentions Wendell Berry as a notable exception, someone he holds in great respect).

Pollan’s next book was 1997’s A Place of My Own: The Education of an Amateur Builder about his desire to build a small hut in the woods behind his house. One reviewer said “the majority of this book is devoted to Pollan’s pretentious musings about a variety of architectural theories and about his interaction with the architect and carpenter who helped him”. It does marks a development in Pollan’s style of leading you through his self exploration that brought him to the 2001 book, the Botany of Desire: A plant’s eye view of the world”.

The genesis for the Botany of Desire book Pollan explains, came from working in the garden on a warm May day planting potatoes next to a flowering apple tree that was alive with the attentions of bees.  Just as he’d ordered his seed potatoes from across the country and it occurred to him that he was perpetuating the DNA of a new variety, his attention was drawn to the bees. He marveled how highly evolved the apple blossom was in shape, colour and open access to it’s pollen, so that the bee is attracted, loads up and then to spreads that around so that it fertilises the next flower. This lead to the idea of investigating how humans have worked to perpetuate the development of plants. For the book he chose apples, tulips, marijuana, and potatoes to explore, providing their history, science, place in literature and philosophical questions raised by looking at how the plants have used human desires for sweetness, beauty and mind altering qualities to ensure their survival. He raises a lot of questions about how we’ve broken our end of the bargain by creating varieties that need excessive pesticides just to exist and alarm at even the more invasive process of genetic engineering.