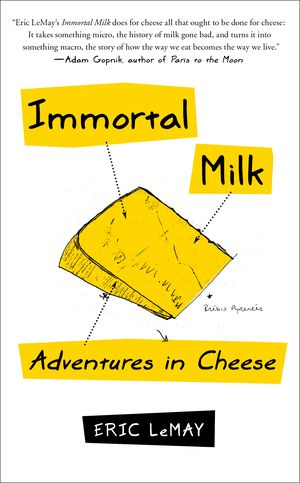 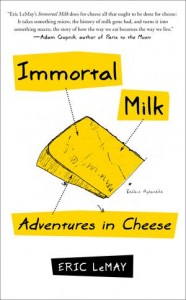 We’re getting used to good writing on wine, now it’s time for cheese to get the limelight.  Maybe even a ‘Sideways’ style movie?

One to watch, released in June in the US, and causing a buzz is Eric LeMays’ book Immortal Milk – Adventures in Cheese. The ‘blurb’ says...

“Is there a food more delightful, ubiquitous, or accessible than cheese? This book is a charming and engaging love letter to the food that Clifton Fadiman once called “milk’s leap toward immortality.”

Examining some cheeses we know as well as some we don’t, each chapter takes up a singular and exciting aspect of cheese: Why do we relish cheese? What facts does a cheese lover need to know? Who makes it and sells it at its best? How did cheese lead to cheesiness? What’s the ideal way to eat cheese—in Paris, Italy, and Wisconsin? Why does cheese comfort us, even when it reeks? Finally, what foods pair well with which cheeses?

Immortal Milk brings us cheese from as near the cheese shop around the corner to as far as the Slow Food International Cheese Festival in Bra, Italy. In the witty, inventive, and wise company of his best girl, Chuck, Eric LeMay endures surly fromagers in Paris and dodges pissing goats in Vermont, a hurricane in Cambridge, and a dispiriting sense of hippie optimism in San Francisco; looks into curd and up at the cosmos; and even climbs a snow-encrusted, lynx-trodden mountain, to discover the mysteries of cheese.

See the book (and Eric’s) website , there’s an ‘inside the book‘ sample on Amazon, and watch the video to see if you like Eric and redheaded girlfriend ‘Chuck’s’ very innocents abroad discoveries. They have all the enthusiasm of cheese ‘novices’  which might grate a bit if you’re already well versed in milk’s leap to immortality. There’s a bit of ‘we’ve just discovered cheese, wow” but remember this is America. (You might feel more comfortable with the new US cheese magazine Culture, reviewed here.)

I’ve put the book on my reading list, you can order it from Amazon here.

One to watch, just released and causing a buzz is Eric LeMays book Immortal Milk – Adventures in Cheese.