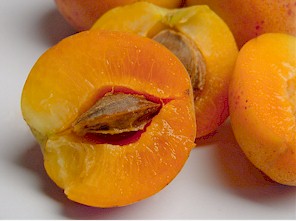 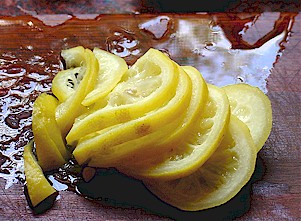 Aaaargh! The pressure to preserve apricots is directly proportional to the amount of fallen and rotting fruit on the ground.

Preserving works when the fruit is clean and unblemished (trust me, it looks really unappetizing sitting blotchy in a jar). Drying reduces pounds of fruit to a few handfuls but doesn’t stick around long enough at our place to go on the shelf. Freezing is a good use of all the bits cut from marked or pecked fruit and that pulp you get when you try and peel a ripe apricot. On defrosting however it is really only good for jam or pies.

This recipe was originally for dried apricots, that were soaked overnight. I took the proportions as being twice the amount of fresh fruit substituted for dried and the result is pretty nice. The original recipe came from The Family Circle Recipe Encyclopedia. Murdoch Books First published 1995.
(That’s when we were trying to convince Matt Handbury that the web was going to be really important for recipe magazines.)

Cook the apricots until soft but not disintegrated in half the water. At the same time cook/steam the lemons until skin is soft (this might take less than 10 minutes). You don’t want to reduce the insides to pulp, but the outside needs to be tender. Keep the water from the lemons, and let them cool.

Slice the lemons and cut into pieces. Be careful, they’re pressurised and they squirt. Think marmalade and how you like your fruit, fine, shredded, chunky etc. I made the first batch a bit chunky, then refined the slices for the next batch. Keep the pips and wrap them in a bit of muslin (or more likely a piece of clean cotton t-shirt. There’s not a lot of muslin around our place). You then suspend this in the mixture to add pectin, using a  bit of string or wire kitchen tie.

Put the lemons, cooking water and sugar in with the apricots. Apparently if you warm the sugar on a tray in the oven, it stops the mixture frothing. I didn’t and just scooped off the froth.

Don’t stir too much, but you’ll need to watch the sides and bottom as the mixture gets stickier and starts to burn. If you have a jam thermometer it should stay at about 105°C – 221°F.

As it gets thicker, use the usual jam tests with a cool plate and spoonful of the liquid to determine if it’s going to set. The lemons and their pips have a lot of natural pectin so you shouldn’t need to use extra such as Jamsetta.

Spoon the jam into warmed sterilised jars and screw the lids tightly.The result is a warm, dark coloured and delicious apricot ‘marmalade’.

Looks like it’s making Jam time to me. This recipe was originally for dried apricots, but works great with fresh ones.