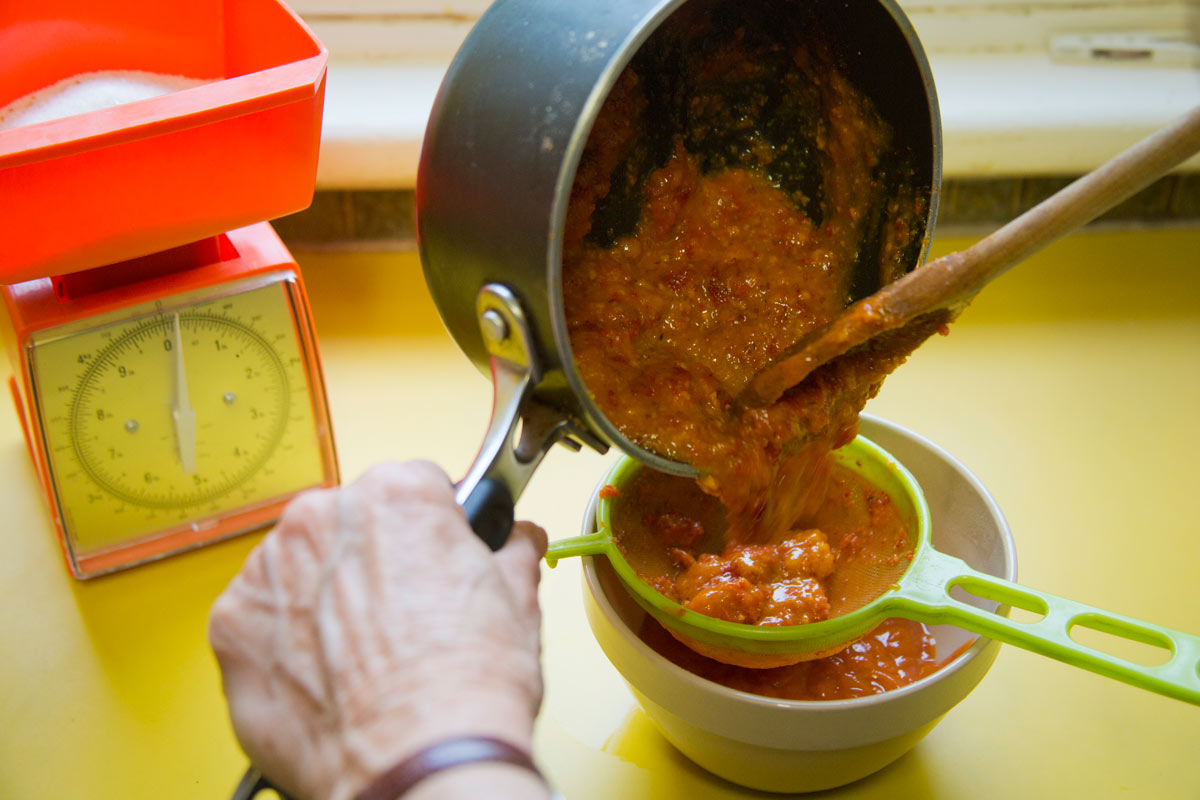 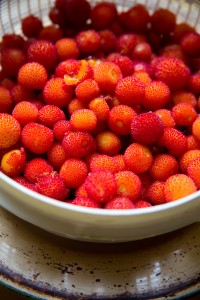 Eaten uncooked, a ripe arbutus fruit tastes somewhat pasty, reminiscent of a overipe apricot, or maybe a locquat. But seedy. The small seeds make it slightly gritty and are probably why it’s called ‘strawberry’. The wild strawberries I’ve had, have firmer seeds on the skin. The outside covering feels a little unfamiliar in the mouth, but you can eat the whole fruit and unlike the warnings from Jan’s mum, their not poisonous.

But, the colour of the outside is so intense that birds and possums can clearly tell a ripe sweet fruit from the slightly bitter yellow ones. Use that as your guide too when selecting fruit for this jam. I picked the bowl shown here in about ten minutes, and I’m sure there will be the same quantity in a few days of ripening. If you’re after quantity, it seems like they’d keep ok in the fridge. Then the only difference between this and other fruit for jam making is the slightly tedious need to remove the pips and skin by pushing the fruit through a sieve.

I had about 700g of fruit and my immediate thought was to add an equal quantity of sugar to the about 400g of resulting pulp. A few recipes on the web suggested that a bit less was ok, and I always feel profligate when I add cups of refined sugar jam-making. So I measured 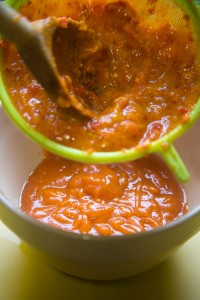 Mix the pulp with the sugar in a saucepan, add the juice of an orange or some bought orange juice and boil up for about ten minutes. During the last few minutes add the alcohol. The suggestion was a couple of tablespoons of brandy, but Jan’s family home drinks cupboard was bare except for some good Scotch and half a dozen bottles of dry and medium dry sherry. There was also a slurp or two left in a Cointreau bottle so I added that. Just to be tidy and to carry the orange theme through. I’d guess you could try anything because it’s flavour not preserving you’re after.

Transfer into sterilized hot jars, and screw the lids down tight. If you’re looking for longer shelf life, you can sit the jars in a saucepan of hot water, up to the lip and boil for a bit as you would with preserves. The small jar that I ended up with I figure will be consumed quickly, and live in the fridge. There were a few spoonfuls left over that I spread on toast the next day and the unattractive colour was the only negative. Considering it starts so vibrant red, and the 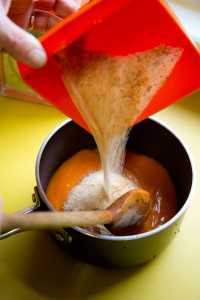 paste is even a nice pumpkin orange, the result is dull brown. It tasted complex and finished with a very slight bitterness that I think was the raw sugar. I had a second slice.

Would I make it again? Probably but if I get enough fruit, I’d try a marmalade fruit mix, something that I tried with the fruit from our flowering quince, that had the same slightly unpleasant paste texture.

If I was a home-brew man again, I’d be tempted to look at seeing how it ferments into alcohol.