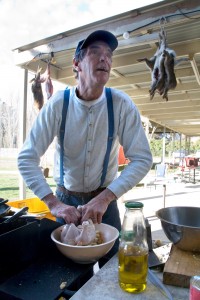 I’ve just been invited to judge again at the Bungendore Camp-oven Cookoff. (The story and video of that are online here) Last year was a lot of fun and although there were more prizes than entries, everyone had a great time and the winning dishes were really tasty. It’s held at the what is abbreviated locally as ‘the Bowlo’, our local lawn bowls club. A couple of big cooking fires are started early in the day, and there’s a fire just to warm the audience, who for a small entry fee get to eat or at least sample, the results. Started by local Vince Skeehan (left), the Bungendore annual Camp-oven Cookoff was a way he saw, to stop some of the old camp cooking traditions from being lost. Every year it collects new contestants and interest from around the country. The locals have embraced the event with entries this year from amatuer and professional cooks. There’s a big public servant contingent from Canberra and some recent new-comers to the town. It’s relaxed, recipes and tips are swapped and it’s another example of how cooking brings people together.

Last year there were a lot of rabbit recipes, but the winning entry was in the Roadkill Stew section and went to Vince’s son Tom Skeehan.  The recipe for that didn’t really feature ‘roadkill’ unless someone hit a flock of sheep. See our Kitchen section for Tom’s Chilli Lamb in Red Wine recipe.

We asked Tom, since both his younger brother and sister were also taking part in the event, if there was also a level of expectation and criticism of the meals at the Skeehan dinner table.  And Tom answered ‘You bet, they’re very picky!’ However, he can obviously stand the heat, because the judges were unanimous on the night that Tom’s dish was the 2009 grand prize winner. The judges were served the prime bits, but there was plenty to go around at the end of judging.

I took some video but never posted it online, I’ll make sure everyone gets to see the result this year. The image below shows just some of the 15 or so rabbits that had to be skinned (skun?) for the event.

This years event is Saturday November 6, the event starts a late afternoon for contestants, and spectators are welcome anytime. The Bowling Club is licensed so it’s a good excuse to bring a group of friends and sit around and watch the cooks. Last minute entries are encouraged. The rules say no ‘off-site’ preparation and only one pot is allowed (although you can grill over the fire.) 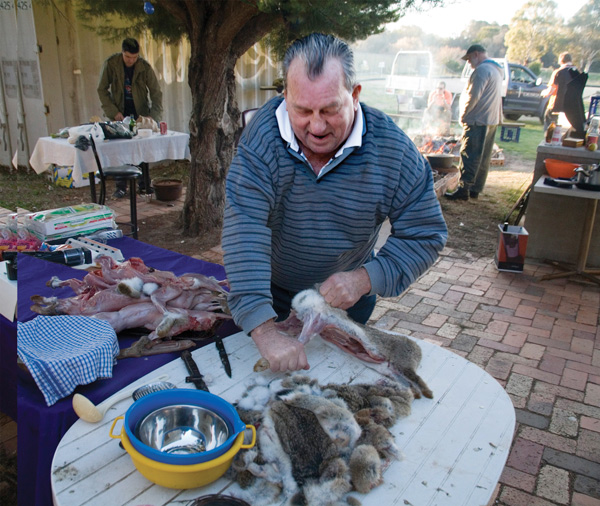