In an recent article in Newsweek, Julia Reed says “Superstar chefs are a dime a dozen. The new foodie hero (is) the farmer.” We’ve been chanting that ‘producers are heroes’ mantra in Regional Food for a long time (as we’ve been doing this).

Ms Reed also alerted us to a new book, due for October 1 release here, called , Harvest to Heat: Cooking With America’s Best Chefs, Farmers, and Artisans. We had a peek inside the book on Amazon and at the publisher’s site, Taunton Press have a table of contents with enough (regional US) names of restaurants and growers to keep you Googling for hours. Days.

Talking about the book Julia Reed says that it

celebrates not only the farmers’ increasingly high profiles but their symbiotic relationships with the chefs, who now plan menus and create dishes almost exclusively according to what they have on offer. So not only do we get the recipe for Thomas Keller’s Lamb Saddle With Caramelized Fennel, we meet Keith Martin of Pennsylvania’s Elysian Fields Farm, who “talks with his lambs on a regular basis.” All that chatting apparently pays off—Keller was so impressed that he became Martin’s partner. But, like most of his colleagues, Keller doesn’t stop there. A browse through a recent tasting menu at Per Se, his Michelin three-star restaurant in Manhattan, reveals an omelet made with Squire Hill Farm’s Ameraucana hen egg, agnolotti with Salvatore Brooklyn ricotta, Cavendish Farm quail, a salad that includes peppers and arugula from Eckerton Hill Farms, and Sterling white-sturgeon caviar. 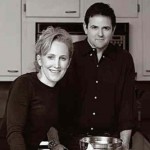 Written by photographer Darryl Estrine and Kelly Kochendorfer (whose name we remembered from her days in the test kitchen at Saveur. She also contributed to Culinaria:USA ) Now it still sounds like it’s a lot about celebrity chefs but anything that points towards the producer on a menu is ok by us! And Alice Waters wrote the foreword.

(It’s interesting given a cheese buzz around here recently, that in the Look Inside link above on Amazon, on the First Pages there are cheese recipes and an item on Cowgirl Creamery – pivotal in the artisan cheese movement in the USA. When we were in San Francisco we did a day at the Ferry Building Markets and the Cowgirls had a big presence.)