Want a serve of good WebTV? 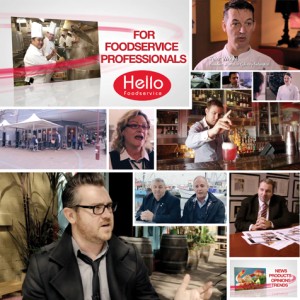 The first program has been online for a couple of weeks, and while some segments are a bit short to add real depth to the story, for a magazine style format with serious intent it works. The video is introduced by Lindsay who does some of the interviews. Program One has a few hits and some misses.

It includes a story on Daily Meal Deals with a boggling shot of the huge call center behind Living Social, an interview with Peter Wright, President of the The Australian Culinary Federation with no news value but a clear plug for sponsors, Foodservice editor Anthony Huckstep talks about the ‘dude food craze’ while some back-packers wander through the background,  ‘Tasting Success’ – a mentoring course for female apprentice chefs could have had some more from Iwona Chuzsno being mentored by Peter Gilmore at Quay , a bit about Restaurant Reason –a site I hadn’t heard of designed to help wait staff learn about menu ingredients like er, aioli (?)  with two ‘Big Apple’ entrepreneurs doing a Skype chat with Lindsay. (There could be more of this Skype video interviewing, the quality doesn’t matter if the content discussed is good. This was a bit throw away.) 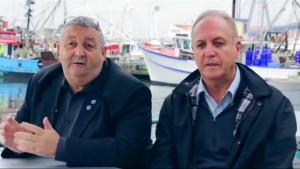 But the best item was with Seafood Experience Australia CEO Roy Palmer (right in photo) and Seafood Importers Association Australia Chairman Norm Grant who give a high level  response on the issue of imported seafood. That’s the kind of story that would bring me as a food service professional back to watch the next episode.

There are ads, but because they were for food service items they were new to me and not intrusive. Let the program load so that it plays smoothly (it didn’t even on my ADSL2 feed) it’s worth doing so you can watch it full screen.

One small complaint is that although there is a handy list of the individual story start times, it’s not streaming the content. So the embedded media player doesn’t let you jump ahead until the entire program has loaded, and it means that if you want to review a particular story or show someone else later, you have to watch it all through, or wait again until it loads. Better still use a video grab program and watch it later on your iPad or tablet. Maybe Hello Foodservice you could offer the program as a download?