Jiro (and Mark) dream of sushi

We were invited to the preview of probably the most talked about food film of last year, Jiro Dreams of Sushi (thank you Tracey). The film was released around Australia from May 10. This HD trailer tells the story well.

There’s an ‘exclusive’ scene from the film on Youtube that doesn’t allow embedding, so you’ll need to watch it there. It shows such grace in Jiro’s hand movements.

We’d been alerted to Jiro via Anthony Bourdain’s visit in his No Reservations series, and David Chang (momofuku) visited and told the story in Lucky Peach #1

Should you see it?

Regional Food’s Mark Kelly says it’s not to be missed. He filed the following review immediately afterwards (given its brevity we asssume it was sent – discreetly- from his iPad in some sushi bar) .

As the world searches for a new order, Jiro Dreams of Sushi provides solutions.

Nestled in a train station in Tokyo and with three Michelin hats, this is much more than a story about Sushi, Jiro is proof that being present is all that matters.
Dreams of Sushi is artfully uncompromising in its message of continuous improvement and passionately unrelenting in the quest for the perfect sushi experience.
You will leave inspired by Jiro’s story and compelled to bring it to life for yourself. And you will leave very hungry so just blow the budget!
Look to your dreams.

Mark added an apology for the existential tone of the review, but now I’ve seen the movie I agree when he says that’s inevitable. 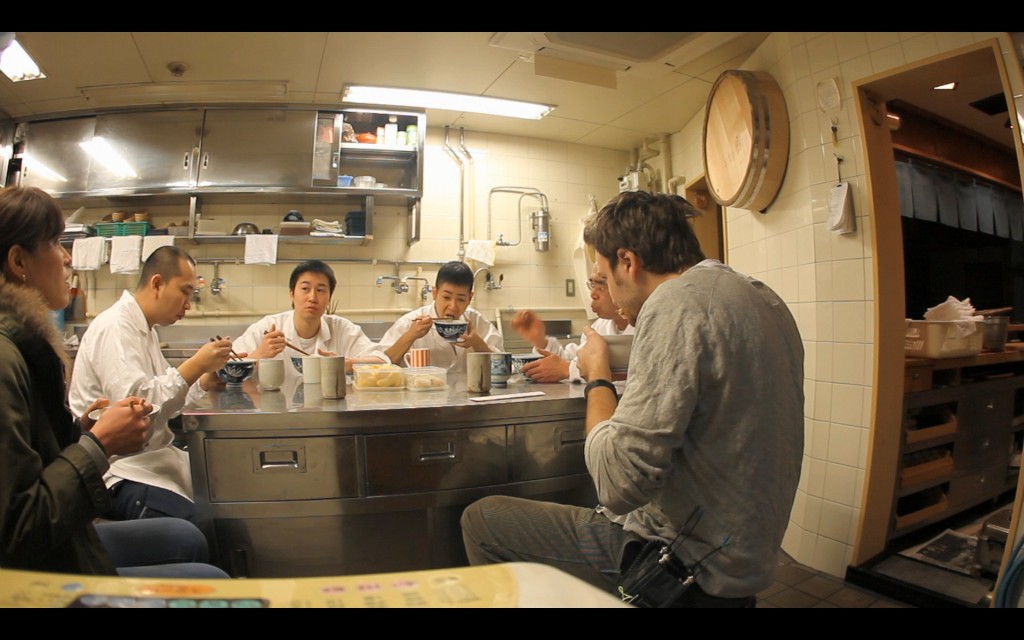 And that’s a behind the scenes, staff and film crew meal break.  That’s my kind of shoot catering!

Here are some relevant links:

It’s the first film for US Director and Producer David Gelb and the press kit offers the following note:

Director David Gelb’s frequent family trips to Japan while growing up ultimately led to his fascination and admiration for the art of making sushi.  He explains, “After college, I saw BBC’s “Planet Earth,” and immediately thought that it would be great if someone made a movie like that about the world’s best sushi chef.  I always felt that sushi is the most visually creative food.  And the sushi chef is the ultimate showman.”   Gelb embarked on a tour of Tokyo’s greatest sushi restaurants with renowned critic Yamamoto and discovered the famed restaurant Sukiyabashi Jiro.  Once he met chef Jiro and ate the most delicious sushi of his life, he knew that this man would be the subject of the film, stating, “In addition to the amazing sushi, I was intrigued by the fact that he is not only working at 85 years old, but that his sons still work for him.”

Gelb spent eight weeks in Tokyo over the course of two years, gathering footage and delving headfirst into Jiro’s world.  Gelb and Editor Brandon Driszoll-Luttringer worked closely to bring out this man’s story, looking to illustrate how his work ethic has molded his character and that of his sons.  Gelb states, “Jiro’s refusal to quit reminds me of my grandparents, who still rise at 5:00 am every morning to write.  This is why they are still so sharp.  Like Jiro, they never stop Improving.”  This act of propelling oneself forward and never looking back is one of the main themes of the film.

Yamamoto, the food critic who ‘discovered’ Jiro, offers his rules for becoming a master:

“There are five attributes to a great chef:

4. Be a better leader than a collaborator

5. Be passionate about your work.”