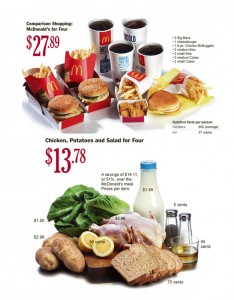 We haven’t written about Slow Food USA’s campaign to show how it’s possible to feed a family for the same cost as junk food,  but you’ll find this NY Sunday Times piece by Mark Bittman (who we wrote about here) a persuasive addition to the  argument. He even addresses the complaint about how busy people want a break and don’t want to cook. He quotes Associate Professor Julie Guthman, author of the forthcoming book “Weighing In: Obesity, Food Justice and the Limits of Capitalism. “The core problem is that cooking is defined as work, and fast food is both a pleasure and a crutch. Their reaction is, ‘Let me enjoy what I want to eat, and stop telling me what to do.’ And it’s one of the few things that less well-off people have: they don’t have to cook.” (My emphasis. RF)

Slow’s campaign has reached Michelle Obama in the White House but in a display of typical? American marketing style, she’s pushing for $4.50 a meal. Read Bittman’s article and you’ll understand why a campaign like that is important for the USA and probably here. Bittman says…

The ubiquity, convenience and habit-forming appeal of hyperprocessed foods have largely drowned out the alternatives: there are five fast-food restaurants for every supermarket in the United States; in recent decades the adjusted for inflation price of fresh produce has increased by 40 percent while the price of soda and processed food has decreased by as much as 30 percent; and nearly inconceivable resources go into encouraging consumption in restaurants: fast-food companies spent $4.2 billion on marketing in 2009

The illustration is from the NY Times article see it in full here. Bittman adds an even cheaper version using beans, and his recipe for Roast Chicken and Potatoes is here. Adapted from “How to Cook Everything,” by Mark Bittman (John Wiley & Sons, 2008)

This is not poetry – correctly labeling cheese