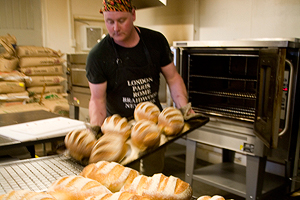 att Hulse is a big bloke who operates a very small and traditional bakery.
Dojo Bread is housed in a charming 1830’s cottage in a back lane behind the historic Southern Tablelands town of  Braidwood’s single commercial street.  Matt initially supported his dream of living in a country town by working the ovens as a cook in the local wood fired pizza joint. Inspired by the traditional wood fired oven, he started making traditional bread.  After some experiements he opened a shop and now has successfully appealed to a niche market in the small and generally very conservative country town. Dojo Bread continues to grow as a business and the future like its splendid product looks very healthy indeed.

Many “blow ins” arrive in the country with the sentimental notion that life in a rural community will be somewhat more wholesome than that which they leave behind in the city. Food will be direct from the farm gate, the air clean and their kids will grow up with a sensitive understanding of nature and a teenage social life straight out of “Swallows and Amazons.” In reality the status quo in rural Australia is to pay ridiculously inflated prices for identical mass produced goods that city supermarkets pedal and vegetables from the same urban distribution centres only days if not weeks beyond their true use by date! The selection of available produce is generally very limited as most self respecting country folk would sooner be dragged by the genitals behind their own tractor than eat anything “too fancy!” As for the teenage social life; well there’ll be no “hoist the mainsail Titty, they’re getting away!” It’s more likely to be perpetual loops around the town’s main block in a V8 ute, leaving behind a trail of smoke, tyre rubber and empty pre-mixed spirit cans! 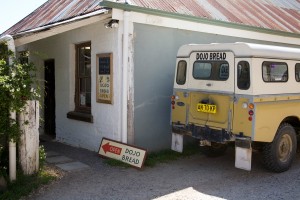 Matt Hulse believed that by establishing a small bakery in a small community, he could not only experience a lifestyle change but also help to perpetuate one for the community at large. Matthew and his wife, arrived in Braidwood at a peak time in the population shift towards the small, exhaustingly conservative and gastronomically challenged town. Driven not only by his passion for nutritious and tasty food, Matt also had a great sense of commercial reality. An excellent and very successful Deli had spearheaded a minor good food revolution in Braidwood paving the way for others to take up the slack in specialist areas. The local butcher was steadily building a reputation for sensational locally farmed, premium quality beef and lamb and a couple of growers were selling a very limited amount of local produce. Above all else, he timed his move impeccably in that the town’s existing bakery had just been swallowed up by a bigger operation from a large regional centre, letting go of any wafer thin shards of credibility that it once precariously clung to. The town’s population of newcomers and even those that fancy themselves as Braidwood’s squattocracy (give me strength) quickly embraced Matt’s nutritious and above all delicious alternative. He was overjoyed to be able to make a modest living from a single business, which like his bread was crafted by his own hands.

orn in Sydney, Matthew Hulse the man is an interesting and complex character. He has had some challenges in his life, but his positive outlook and fighting spirit, largely spurred on by his dedication to the philosophies of the Japanese martial art of Aikido, seem to keep him on a path that works well for him personally. Matt has no apparent political leanings, yet his philosophies and musings regarding nutrition, community and small business could easily be parallelled with the warm and fluffy aspects of Marxist idealism!

He feels very strongly about corporate greed and it’s affect upon society and the family unit in terms of well being and social welfare. Which has subconsciously led to Matt’s Geldof like obsession with feeding the world nutritiously.  Matt claims that his main objective as a corporate manager was to be personally responsible for helping those that he dealt with on a day to day basis. It’s a believable notion coming from this big but gentle man and it appears that he achieved his objective with great success. It appears that his mind is perpetually churning, often without allowing for a break before communicating the next thought with intense enthusiasm.

Matt worked during high school in a local butcher’s shop, bringing home meat for the family and learning to prepare them. While studying agriculture at the University of Western Sydney his career began humbly as a delivery driver for a bakery, he later found himself managing the business. Matt left the bakery to pursue a management career with several franchise commodity food business. He spent some time working for the immensely successful Baker’s Delight. When I pointed out to Matt that his work with such a bakery very much contradicts his new life as an artisan baker, he made the point that despite their formula, they come second only to Vietnamese migrant bakers in being responsible for re-introducing “hot bread” to the Australian mainstream market, which in turn becomes a little less mainstream for it.

y this point in time, Matt had become extremely dedicated to Aikido, having reached the status of instructor.  While training he met a student that caught his eye more than most.  The couple now enjoy a marriage of which they are both immensely proud.  Following the couple’s move to Braidwood, the small bakery was born out of the relatively small investment of $20,000. It seemed only right that the business be named after the “dojo” or training hall of Aikido. Matt believes that there are extremely close parallels between the precepts of eastern philosophies and the “religious” practices of bread making. He even has a bread guru in the form of Lionel Poillan, the doyen of French baking.

Dojo produces a range of totally purist artisan breads, employing the now very popular sour dough method which utilises wild yeast from the flour as well as naturally occurring, health promoting enzymes such as lacto bacillus. It’s the baking equivalent to the world of winemaking’s wild yeast fermentation. Despite Matt’s passion for purism, he’s also an economic realist. He claims that without a soft white, square shaped product his figures of 10% of the population purchasing half of their bread from him would be reduced to 1% buying only a quarter. It’s important not to forget where your business is located. Despite its mainstream appeal, the Dojo Soft White High Top is made with only the finest flours and yeast with the added nuances of premium sea salt and filtered water. It’s quite simply delicious. There are spelt, dark rye and wholemeal variations as well as a crusty white Vienna and classic baguette style sticks.

The holy grail of Dojo Bread however, is the range of sour dough varieties. All are baked using organic ingredients and are delicious as well as high in nutritional value. The multigrain loaf for instance contains baker’s flour, wheat, spelt, rye, oats, corn and barley for starters, some of which are milled on the premises. It’s crusty, heavy, rustic and flavoursome. It never seems right to cut it with a bread knife. I prefer to rip it apart aggressively whilst expelling guttural grunts! I then use it to mop up the juice from my favourite of all comfort dishes, a Lancashire hot pot of slow cooked best end and neck of prime mutton from the Braidwood Butchery.

The sweet products in the Dojo range are somewhat of an indulgence but like the other breads, Matt ensures that they too are augmented by health promoting, very digestible and natural ingredients such as molasses, honey and sour milk.

Like many premium food products, artisan bread has its roots firmly implanted in working class tradition. Matt’s inspiration comes from Australia’s working class ethnic societies that make seasonal food production of delicacies such as wine, tomato sauce and even bread an important social event. That seems to have been lost from Anglo Celtic society in Australia. The middle classes are embracing the natural food revolution, but in terms of the working class most premium, natural foods are cost prohibitive in a country where the economic gap is widening. Matt believes that small localised bakeries can be the first step in traversing that gap leading to improved nutrition. If his efforts to date in Braidwood are anything to go by, he may just be right.

Scott Watkins-Sully prepared this story some time ago for a print issue that never happened. We asked Matt to bring it up to date. Thanks to you both.

Scott Watkins-Sully tells the story of a big bloke in a small traditional bakery in historic Braidwood NSW.