Culture – the word on cheese 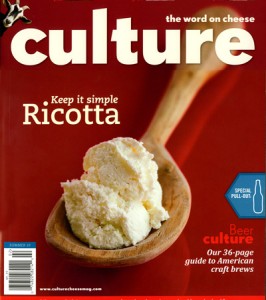 I picked up a copy of Culture magazine in an airport in America. It was a slim 100 odd pages but looked like it had been around for a while (it had, six issues). While I found the stories interesting it clearly was covering the interest in home cheesemaking and the growing interest in American cheese with an each way bet on overseas stories. I bought a copy for Russell Smith and carried it around for a month. When I arrived back home, there on the shelf of the local news agent was the issue at left, Summer 2010.

So you’ll be able to get a copy if you hunt around and it’s recommended if you want to see a continent waking up to cheese. We can feel a bit superior knowing more about our cheesemakers but this magazine has a great depth 0f material to draw from, as all ststes of America is encouraging artisan cheesemaking.

The ad content is small but since this issue has a pull out insert with ads, healthy (small publishers count ad pages before they read the content) and there are some surprisngly familiar faces, King Island, MilLel and Tasmanian Heritage (ditributed in the USA by Jana Foods). There’s a cheese centrefold and some of their own product marketing, and it all has a confident feel. The editor is Elaine Khosrova and we wish her and the publication good fortune for the future.

The magazine’s website is culturecheesmag.com where you’ll find a piece from US cheese writer Laura Werlin which includes these quotes that give you a sense of the excitment that is behind the publication

At the time, the only type of American cheese most people knew about was the orange, presliced kind that was scorned more than savored, especially by food sophisticates. When I told people I was writing a book on American cheese, many would ask, incredulously, “What’s to write about?” Without hesitation I’d respond: “A lot.”

I recall, for instance, wandering into a San Francisco cheese shop to peruse its selection. Out of about 200 cheeses, only two were American. I asked the shop manager why that was, and she answered with great disdain, “Because most American cheese is terrible.” I could not convince her otherwise.
Now, a decade later, I am amazed and thrilled about the evolution of American cheese and the enthusiasm for it that pervades our culture. My bookshelf alone provides indisputable proof of this: in 1999, I owned fewer than ten books on the subject; today that same bookshelf overflows with 70 books on cheese (not to mention copies of this magazine, the first consumer publication dedicated to cheese).

Culture- the word on cheese 128pages + insert (on artisan brewing)