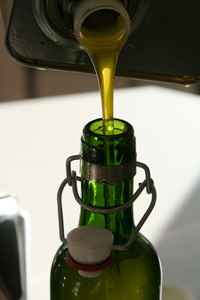 I can hear the chortling from the supermarket big two boardrooms from my desk. Olive oil has joined items like milk and eggs in the current price war, with Coles dropping their prices and Woolworths following suit as fast as they could get their agency to place an advert.

The company boards will find they’re the only ones laughing as items are being sold under their production price in a cynical ‘loss leader’ approach to building competitive share. It might work for many of the shoppers whose world is limited to their weekly supermarket trip, but as the big two know, that world is shifting around them as we demand things they can’t deliver. Freshness, service, our longing for real food experiences (shown as regional support for our farmers) are all of high, and growing importance, if we can believe the surveys. The small retailers are the ones who will suffer as they have to try and match prices without the tough guy buying muscles of Coles and Woolworths.

This post was prompted by a media release from the Australian Olive Oil Association and I don’t often print releases in full, but this has a suitable anger level I can’t match. Read it and spread the word.

Australian Olive Association (AOA) CEO Lisa Rowntree is concerned that the ongoing “turf war” between Coles and Woolworths has the potential to damage Australian olive growers.

Coles’ recent decision to permanently reduce the price of staple grocery items including olive oil (immediately causing Woolworths to follow) can only lead to lower prices being paid to Australian farmers in the future. The Australian Olive Association has written to Coles and Woolworths to get clarification on two questions they believe are very important to AOA members and to Australian consumers.

2.  Why are Coles and Woolworths still stocking major imported brands of Extra Virgin Olive oil that are mislabelled product and are not Extra Virgin? Two Australian government surveys in 2009 and 2010 showed that approximately 80% of imported olive oil labelled as Extra Virgin did not meet specification.  In June 2010 Choice magazine identified numerous Extra Virgin olive oils that failed to pass quality tests, mostly imported that are still being stocked and promoted by the major retailers.

“The advertised price for imported Spanish oil at the moment is below our cost of production.  We have also been informed by our grower colleagues in Europe that they are selling their oil below cost while trying to survive the current very difficult economic conditions in southern Europe. As an efficient and careful grower myself, I question if pricing based on this situation is sustainable and wonder about the product quality that results from such price pressure,” says Ms Rowntree.
However, Ms Rowntree believes that there is a bigger picture problem here that many consumers may not have thought about.

“I suppose it is similar to the fuel situation – once local food production cannot compete, then not only will we be completely reliant on overseas countries for our food, the long term social impact on rural Australia will be disastrous.�
“I just hope the retailers and consumers alike will get behind Australian food including its olive oils. Farmers have copped a beating with natural disasters like droughts, floods and cyclones recently. Australian olive farmers also have to cope with substantial production subsidies paid to European olive growers and processors.”

The new seasons olive harvest will commence shortly and this will mean an abundance of fresh Australian Extra Virgin Olive oil being available.

“Harvest is always an exciting time,” adds Ms Rowntree.  “We work all year to produce this fantastic, healthy, natural product.

“What can we do?  I think it is important to increase consumer awareness so that the customers are able to make an informed decision at the supermarket shelf.  This is why the AOA has concentrated on the establishment of a code of practice for Australian Extra Virgin Olive Oils and is now focusing on the establishment of recognised standards for Olive Oils in Australia and New Zealand that are intended to make the various qualities and grades of olive oil clearer to consumers.

The problem is that it’s really hard to make a difference as an individual consumer, it can take a long time for the managers to notice that cheap stock is sitting on their shelves that we won’t buy.  We can easily be accused of elitism because we know what oil costs and are prepared to pay it, you’ll never win the argument “Why shouldn’t the working families get a break’.

I felt comfortable that I found other reasons to support people like Aldi who have taken a responsible approach to a discounted oil They’ve cited environmental initiatives, adherence to Australia Standards but even that comes with concern for the price my olive growing neighbours have to ask to survive.

I’d love your feedback on this.

Milk, eggs, now oil. This spells disaster for local growers. What chance Coles and Woolworths will answer these tough questions?

Reasons to be cheerful – and buy ALDI's olive oil