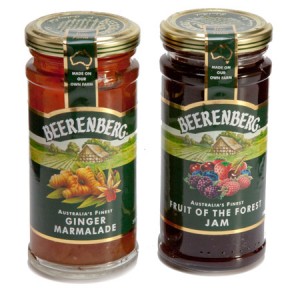 We’ve given Beerenberg’s products a mention online and in print for years, since we called past their Hahndorf Farm Shop when we were working on the Fleurieu issue. They’re very good at self promotion and send out regular samples of their new releases. The Beerenburg business is close to being a perfect Regional Food profile. A rural, family owned business started and managed by Grant and Carol Paech with their three children – Anthony (the Managing Director) Robert (the Farm Manager) and Sally (Marketing and the website). They have been  deservedly inducted into the Family Business Association (SA) Hall of Fame. Their commitment to traceabilty of their ingredients sets the standard (Type in your barcode at the website and you (might) get a list of the ingredients suppliers and who made it at the factory (it’s a great idea if a bit buggy, if they’ve entered the data – try the sample they suggest a few times).

If you read between the lines of a recent Beerenberg press release announcing sales of a million jars in 2010, it tells how that success has been hard won in an environment of two monopoly supermarkets.

National sales of the company’s jams are up from about 250,000 jars in 2007 following a hard won campaign led by Managing Director Anthony Paech to have his family’s products join major Australian and multi-national producers on the shelves of Australia’s major supermarkets.

Beerenberg Managing Director, Anthony Paech, says securing national shelf-space with the majors; supporting growth with improved production practices; and marketing its products around Australia has been “hard work for the whole Beerenberg family, but rewarding”.

“We make great tasting quality products but that alone is not enough,” Mr Paech said.“We’ve also benefited from a community-wide desire for authenticity, a strengthening propensity among Australians to buy locally made products where possible – and the courage of Coles and Woolworths to follow the independent supermarkets in giving the little Aussie a go.

Before Christmas we recieved samples of a few of the ‘seasonal’ products we’ve already tried and like, Redcurrant Jelly, Cranberry Sauce and Applesauce and they all went out on the dinner table at our family’s very traditional Christmas dinner. They joined the home made bread sauce that is prepared fresh each Christmas.

Amongst the new products were  – Ginger Marmalade and Fruit of the forest jam. Anthony’s web blog says “This luscious jam contains Strawberries, Cherries, Blackberries, Raspberries and Blueberries. We have only made limited numbers for the first run so keep a look out for it in independent supermarkets over the coming weeks.  It will be the same price as all the other jams.  Also, you can buy it now at our shop up here in Hahndorf!  Ginger Marmalade is back! We just made up our first batch in more than 15 years.  This used to be an old favourite – now it is a new product to be added permanently to our range.” 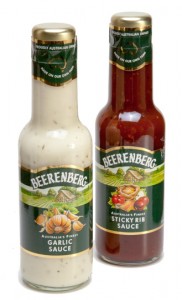 And there are two new sauces, the Beerenberg Sticky Rib Sauce whose ingredients are tomato, apple, plum, sugar, molasses, honey and spices including smoke flavour. Described as a “sweet, smoky marinade sauce with a generous selection of fruit, spices and just the right amount of smoky-ness that is perfect for finishing off a rack of ribs”.

The other  is a Garlic sauce. Now if those descriptions look like they’ve come from the press release you’re right, ‘bountiful forests’ ? Splutter.

Of the two new jams the Ginger marmalade is a bit watery, made as it is with only ginger as the fruit base, it tastes good though. The Fruit of the Forest jar disappeared  like, we’ve tried the Sticky Rib sauce(video) as a mix in lamb mince for bbq hamburgers, and the flavour was a bit too subtle until we poured some on top afterwards. If you use it on a grill, you’ll find it’s a very STICKY rib sauce.

I prefer the Beerenberg Coopers Ale Barbeque sauce made “from one of Coopers finest ales” which is as almost as good as the ale.  I’m working up to using the Garlic sauce I can’t quite see how I’d apply it, ( I’m a fresh garlic cook or in a pinch,  a spoon from a jar of crushed garlic).   The other sauce we loved and it took a while to find a stockist nearby after our sample bottle ran out, is the Beerenberg Taka Tala Sauce and a  Chutney described in the release as “The recipe for this exotic product originated from a farmer in Zimbabwe. It contains an abundance of fruit and vegetables, herbs and spices” and it adds an instant taste of African/Moroccan (I’m not up on my Zimbabwean cuisine) .

We just add about half a bottle of the Taka Tala  sauce to a standard  lamb or veal casserole which we always eat with cous cous and harissa. The leftovers are even better reheated the next day as it enfuses.  There are some recipes for the sauce (and all the Beerenberg products) here at Beerenberg’s website.

But what is that Pigs is Pigs reference about?

Well it’s the size of the our Regional Food postbox. We upgraded to a medium one to allow for more PR material and returned magazines, but it’s never big enough at times. Just like the weeks where we recieved new samples of Beerenberg, all wrapped carefully in bubblewrap and in individual long cardboard boxes that started to build up while we were away somewhere. Boxes were placed in the postbox, then taken out to allow mail to fit, a message card was left to say there was a parcel. After a week or so I was clearing the box at night after closing time and when I didn’t come to collect the mounting pile of parcels, they Post Office put one in at a time. But more kept arriving and one day when I took the bundle of cards in, one of the temp staff could only find one I hadn’t picked up according to the cards. The next day there was another two in the box and a scrawled note saying ‘Help, we found more of these to collect’.

We worked out that Beerenberg were sending two of each, one to my wife Jan O’Connell as the co-editor and one to me.  When I finally got ahead of the glut to collect them, I opened the boxes on the counter and gave the Post Office staff one each (they’re long suffering processing a magazine’s mail and I always make sure they get some wine for their Christmas party).

The whole process reminded me of a story that I read as a kid in a Readers Digest humour collection (we had the world’s great literature around at our house). Of course I had to look it up and as you’d expect there was plenty of web references, including this Wikipedia one. And there was this Walt Disney cartoon I remembered from one of the Saturday picture nights at our local hall.

Thanks Beerenberg, Regional Food and the Bungendore Post Office staff love your work and I hope you reach another million jars sales in 2011.