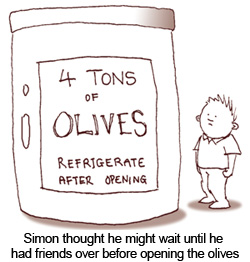 I need a new fridge.  But a quick survey of the latest models available at Hardly Normal reveals that even a new fridge is unlikely to solve my problem.  Yes, they all come with nifty cheese compartments and egg holders, crisper drawers and meat keepers.  They’re all perfectly adequate for storing the fresh produce we lug home from the market.  But they’re all woefully inadequate when it comes to coping with the modern way of eating.

I’m talking about that dread phrase ‘Refrigerate after opening’.  Now that it’s commonplace to eat Mexican one night and Thai the next, Chinese quite regularly, with the occasional Saturday night curry or laksa, our fridges are becoming repositories for half-used jars of exotic ingredients. This problem is particularly acute if you’re empty nesters, using smaller quantities of everything.

A recent survey of the top shelf of our refrigerator revealed no less than 36 partially full jars and bottles, from your standard oyster and plum sauces and assorted jams to a scarcely touched jar of tamarind pulp, some Maggie Beer preserved lemons and a jar of anchovies in oil (one anchovy left).

I’m sure, in days gone by, many of these items would have been stored on shelves in a cool, dark place. Today, however, manufacturers need to protect themselves from law suits by exhorting us to take no chances.  Even the familiar Rosella Tomato Sauce, which never lived in the fridge at Mum’s place, carries the dread exhortation.

We’re running out of room.  We’ll either have to purge our menus of exotic flavours, become wastrels who discard the unused portions or, as will probably happen, continue to blunder around trying to find things on the top shelf.  And as the leaning tower of pesto crashes to the floor, taking with it the mayonnaise and three half-used jars of marinated vegetables, we’ll mutter darkly about impractical packaging and silly fridge design.

Usually, I am better than my other half at finding things in the fridge. Conventional wisdom holds that women have better peripheral vision and are therefore better at locating things: an acquaintance once described this as the difference between a ‘mummy look’ and a ‘daddy look’.  You’d think, though, that some tuned in manufacturer would devise a system that would allow even the most tunnel-visioned male to find the whole grain mustard without assistance.

Maybe they could include drawers or sliding trays that would allow the miscellany of small jars and pots to be conveniently stored and easily viewed.  Or a lazy Susan. Some of the Very Large Fridges had additional trays inside the doors that would be useful, but even these couldn’t cope with our array sauces, spreads and seasonings.

We rarely stop to think how refrigeration has revolutionised our whole approach to food.  I can remember, just, living in a household that had no refrigerator – just a leaky ice-chest that sat on the back verandah.  It was used for meat, dairy products, the odd bottle of beer; almost everything else was bought fresh as we needed it or lived in the cupboard. Of course, food was a lot plainer then and condiments consisted mainly of salt, pepper, the ubiquitous tomato sauce and a cardboard box of Keen’s Curry Powder.  Not much call for ‘Refrigerate after opening’.

But we wouldn’t want to go back to those days, now would we?  So we’ll keep shoving the unused portions into the fridge, alongside the left-overs from yesterday’s moussaka and Sunday’s stir-fry and Saturday’s risotto.  Hmmm…left overs.  Now there’s another story…

What’s in your fridge?

This column was published in the first edition of Regional Food magazine in winter 2005. It initiated a series of musings about the way we eat, drink and shop.

And then there were two