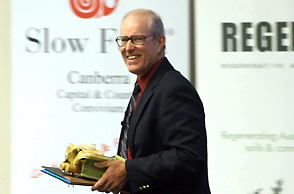 Joel Salatin made another whirlwind tour to Australia in early December last year, with public lectures in Sydney and Canberra and took part in a two day alternative farming event at Mulloon Creek Farm (just up the road from me in Bungendore). I was able to make a video of Joel’s talk at the ANU, presented by Slow Food Canberra and Milkwood Permaculure.  And with a few glitches, it’s up here in full (and on YouTube). The video below is a summary of the first response to the Assumption  “Oh, you can’t be serious. You can’t feed the world!” , and the farewell ‘blessing’ Joel gives at the finish of his speeches and lectures. There’s a small bit of him book signing at the end of it.

Joel’s voice was obviously straining from all that talking, but what he had to say is a great summary of the arguments and problems we face trying to promote sustainable small-scale agriculture as a viable alternative to big agribusiness.   It’s worth watching the full version because his argument is developed persuasively.

We visited Polyface Farm in May 2010 and you’ll find more details up on our Growing the Growers project site.

A short taste of the full video of an evening with Joel Salatin where he suggests that, just like the Religious Inquisition 500 years ago, we’re now experiencing a Food Inquisition.

Answering 12 Assumptions of the Food Inquisition