Sainsbury's wants the UK to Switch the Fish. Should we? 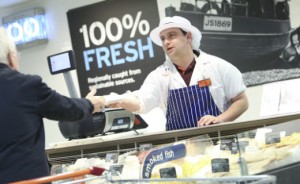 Yeah I know it’s a supermarket, but I’ve always kept a sustainable eye on Sainsbury’s from the time when Jaimie Oliver, who was their highly paid poster boy at the time, gave them a serve in his series Jamie’s Fowl Dinners. And they responded and have continued to try and be sustainable. Giving them a thinking foodie’s lead position. I was interested to see that they’d researched cookbooks to source opinions about sustainable fish. I bet if they looked at cookbooks aimed at me, they’d find pretty much the same problem. Sainsbury’s latest press release promotes their one day free give  away of  ‘seven tonnes of lesser known British fish (lemon sole, mussels, Cornish sardines, coley fillets and loch trout fillets) to encourage customers to expand their food repertoire and eat alternative species’.  It says…

The Switch the Fish campaign launches alongside new research from Sainsbury’s which shows cookbooks aimed at families and children continue to encourage the consumption of the Big Five species. The research, which analysed the top 25 children’s and family cookbooks in the UK, shows that 78% of all fish recipes required one of the Big Five species. Across all fish recipes salmon was the most commonly featured fish (25%), followed by prawns (14%) and tuna (14%). Of the 22% of recipes which contained alternative species, mackerel came out on top, included in 5% of all fish recipes, followed by trout and seabass (2% each). Perhaps most worrying, only three books across the whole sample, contained messages about sustainability and the importance of using lesser known species.

I’ll have to take their word that lemon sole, mussels, Cornish sardines, coley fillets and loch trout fillets are on the sustainable list… ( as he goes off internet burrowing, for his UK fish varieties. or to Alan Davidson (editor of the Oxford Companion to Food, which is the one book that I choose first before I Google food stuff) started as a fish expert/book author because he loved the lesser known and weirder/attractive varieties and couldn’t find a book listing them.

Sainsbury’s are working with Fishermen’s Mission as their charity who get a donation when people actually do Switch and buy. The full press release is here.