This was sitting in my Drafts folder for ages. The longer it sat there the less relevant it became but now as the truffle season approaches…

When Gourmet magazine ‘folded’ (as appropriate a metaphor as we’ll get in publishing),  I missed it. I missed Ruth Reichl, I missed the magazine’s editorial stance and rigour and maybe I missed a little the story-based recipes. I used to buy the magazine for the articles, but only about every second issue, so maybe I was just part of their declining readership problem.

So I was pleased to see that there was an iPad version and I paid my money and signed up for a year’s subscription plus something special (something to do with bookmarks but I’m not exactly sure what it is. That’s not being smart arsed, just indicative of the new media business model that Gourmet makes look confusing.) The app was free and I think the now weekly? magazine is too. But you buy the recipe collections, although you get free bonus recipes that pop up while you’re reading that are advertiser sponsored. Give me time and I’ll work it out.

Or maybe I won’t, because I find the iPad editions of Gourmet Live  trivial, with lack of proof reading and no editorial consistency. It is also poorly designed. The interface is ok but with almost silly food photography accompanying the stories that don’t work on the screen. In all, not a great reading experience. I’m sure the editorial team are doing their job, but there seem to be just a couple of them left to the task. And one of them is updating the Gourmet Live blog. 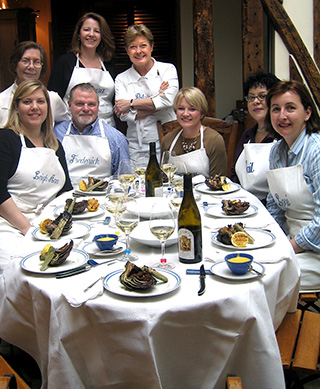 But there has been at least one recent story that I’ve read that interested me. They haven’t all been good, a bit too short and lightweight because of that, but in the  edition 02.16.11,  I was attracted by the focus on truffles. It turned out to be and a story by New York PR guy Joe Dolce about a truffle cooking class he attended in Provence.

The class was run by Patricia Wells, an American journalist who has resided in Paris since 1980. In addition to authoring numerous cookbooks, Patricia has had a remarkable career as one of the world’s leading food and restaurant critics. Currently, she is the restaurant critic at the International Herald Tribune. From 1976-1980, she was the New York Times food writer and editor. Most notably, she is the first woman and the only foreigner to have served as restaurant critic for the French publication L’Express. Patricia has also written seven wildly successful books, including The Food Lover’s Guide to Paris, The Food Lover’s Guide to France, Bistro cooking, Simply French, Patricia Wells’ Trattoria, L’Atelier de Joel Robuchon, and Patricia Wells at Home in Provence.

The next class is  January 21 to 25, 2013
Black Truffle Cooking Extravaganza with Patricia Wells
The class is limited to 12 participants. The course begins with dinner on Monday evening and ends after lunch on Friday. The fee is $5,500 and includes Monday ’s truffle dinner, truffle lunches and dinners on Tuesday and Thursday, Wednesday’s winery visit and lunch, and a farewell lunch on Friday. Wednesday evening is free for students to explore the region on their own. The fee does not include lodging.

What do we know about Joe Dolce?

He’s a partner in the PR and Media Strategy firm, DolceGoldin and as this article says in the footnote “the creator of a new online publicity system for authors. He was the former editor in chief of Details and Star magazines.  He still doesn’t have a website.  He did an interview with author Gretchen Rubin in Arielle Ford’s EYSK Newsletter Vol 4  that I  found on mstand.
The article Photography by Jeff Kauck, a top Chicago based food photographer.  He photographed Patricia Wells Salad cookbook and some attractive other ones, and had a James Beard nomination for the Spiaggia Cookbook

Gourmet iPad app leads to Patricia Wells and she does truffles.