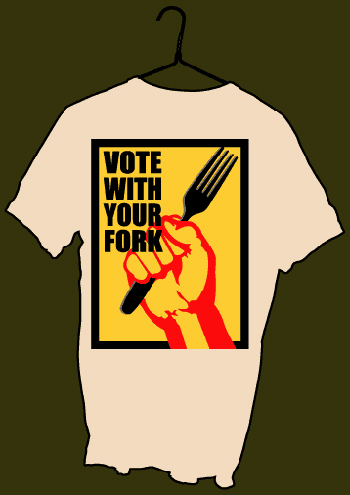 If you’re going to leap into Pollan’s work, I suggest you start with what was his 2006 book The Onivores’s Dilemma: A Natural History of Four Meals. This book was named one of the ten best books of 2006 by the New York Times and the Washington Post. It also won the California Book Award, the Northern California Book Award, the James Beard Award for best food writing, and it was a finalist for the National Book Critics Circle Award. Yes, it deserved all of them..

The four meals in the title are a mechanism for following three food chains that lead to specific meals or ways that we might eat. Pollan describes them as…

The industrial food chain which “follows a bushel of commodity corn from the field in Iowa where it grew on its long, strange journey to its ultimate destination in a fast-food meal, eaten in a moving car on a highway in Marin County, California.”

The second is the pastoral food chain and “explores some of the alternatives to industrial food and farming that have sprung up in recent years (variously called “organic,” “local,” “biological,” and “beyond organic”), food chains that might appear to be preindustrial but in surprising ways turn out in fact to be postindustrial.”

The third and last section, is titled Personal and “follows a kind of neo-Paleolithic food chain from the forests of Northern California to a meal I prepared (almost) exclusively from ingredients I hunted, gathered, and grew myself..”

Along the way Pollan talks about all the ‘big issues’ of ethical eating, sustainable eating and  only stops short of telling us what to eat (although his preference is for his ‘Perfect Meal’ that takes into account having to kill animals himself and eat in full consciousness of “paying the full karmic price of the meal”.

If you’re a regular Acres reader there is some repetitive re-enforcement in the book in why the organic path leads to godliness, but Pollan’s writing here is his most assured. Even when he’s restating things you’ve already read, there are new anecdotes, quotes and asides that keep it fresh. The fact that he agrees with our established organic positions for alternative agriculture as a way to save the planet, helps of course to our liking him. Yet there’s a constant challenge of that journalist’s mind to not be seduced by any single argument.

His encounter with farmer Joel Salatin* (who to emphasise his dependence on the role played by good soil describes himself as a ‘grass farmer’) obviously influenced Pollan with the display of a model of his successful and sustainable mixed farm as an antidote to monoculture. Pollan spent a week working at Salatin’s 100 acre Polyface Farm, and listened to his distaste and concern for ‘Big Organic” becoming just as industrialised as conventional agribusiness. Pollan then researches ‘big organic’ with balance (and admits his own growing concern).

Pollan confesses to enjoying shopping at his local Whole Foods store as much as visiting a book shop. He’s seduced by what he calls the evocative prose of “cutting edge grocery lit” and wonders at terms such as “from cage-free vegetarian hens” and “humanely raised” “sustainably farmed” “organic feedlots”. All of them get further research in the book.

It was growing anxiety that they can’t even trust their local organic food store that lead Pollan’s readers and lecture audiences to press him further for advice about WHAT the should eat. This lead to Pollan’s latest slim volume In Defense of Food: An Eater’s Manifesto. And it is a manifesto with a distillation of the arguments from what he’d learnt writing the Omnivore’s Dilemma and a check list designed to help the reader’s who need someone to tell them, if not how, why they should eat consciously.

And this is where I see the Pollan Paradox at work. Pollan admits that he’s caught in a double bind of having to use nutritional science to point out how nutritional science still doesn’t know what’s really going on in our food (he calls it Nutritionism – a cult that says chemicals will make us whole if we can just find out which ones are good for us). With this best selling book Pollan is also caught up in the American (and yes Australian) thirst for the next food fad publication. Even when this time, it warns against food fads and articulates eloquently the reasons why. He writes about the Atkins Diet phenomena that altered supermarket shelves and sent farmers broke. The meat is good, carbs are bad phenomenon that he dissects in damning (for the USDA and Government Health departments) detail.

Pollan said his publisher was somewhat surprised when he suggested that they put the essence of this book on the cover, the haiku like “Eat Food. Not too much. Mostly plants”. The publisher suggested that now they needn’t buy the book! Here Pollan is giving us a lecture (the tone reaches that school teacher tone in a few places in this book) his cover advice translates as…

Eat Food, not what he calls ‘edible foodlike substances’, the processed and nutritionally enhanced products that are typified by taking a breakfast of muesli with milk and turning it into a breakfast bar with some form of chemically stabilised creamy centre to be eaten on the run. Not too much, is a admonition of a growingly obese Western World where portion sizes are growing larger. And Mostly Plants recognizes that grains, as in industrialized corn farming in particular may mean cheap fodder for beef and chicken but is an incredibly inefficient way to create protein (even before the trend came of producing ethanol from it). Pollan argues the amount of meat we eat is also unsustainable and advocates that it becomes as in poorer cultures it becomes flavouring and should be considered just part of a meal.
Pollan then adds a checklist for how this can be achieved (here with my comments)

1 Don’t eat anything your great-grandmother wouldn’t recognize as food.
(In effect avoid modern processed products, not new ingredients from other cultures. My great grandmother would not have recognised spaghetti!)

2 Avoid food products with more than five ingredients; with ingredients you can’t pronounce.

3 Don’t eat anything that won’t eventually rot.
(Eat fresh or frozen ingredients rather than preservative laden ones. Bread doesn’t need to last for three weeks.)

4 Shop the perimeter of the supermarket, where the food is least processed.
(That’s where you’ll find the fresh food aisles, dairy and meat cabinets)

5 Avoid food products that make health claims.
(Taking natural ingredients and processing their nutritional properties out and adding ‘healthful ingredients’ back is the only way the food industry can make more money.)

7 Eat only until you’re 4/5 full. (An ancient Japanese injunction.)

8 Pay more, eat less.
(Paying for good quality and demanding an assurance of its source means you enter an agreement with the producer, who can keep doing it sustainably.)
9 Diversify your diet and eat wild foods when you can.
(Fish for example is mostly a wild caught food,)
10 Eat slowly, with other people whenever possible, and always with pleasure.

If that reads a bit like the Ten Commandments, Pollan is adding to them with lighter-hearted ideas like “If it arrives through the car window, it isn’t food.” and “Eat all the junk food you want–as long as you cook it yourself.”
Michael Pollan has reached celebrity author status and as you’d expect is very media savvy. His New York Times guest blog, a good personal website, and lots of YouTube videos of talks and lectures, all place him in the position of being accessible to today’s reader who is Internet aware. While the three minute media grab might dumb down an important message such as Pollan’s, being accessible online means that more people will follow up the links and cross references to add depth and involvement beyond even a printed argument. His work on agitating for change in the US Congress’ Farm Bill (which he wrote about in Saveur magazine’s  Saveur100 issue as ‘The year the Farm Bill became sexy’) uses his celebrity status to effect in the cause of new food politics.

Even if we already know how to eat, we need Michael Pollan.

His website http://www.michaelpollan.com/ has links to much of his published work

The Botany of Desire is the subject of a talk in 2003 that Michael gave
YouTube link http://www.uctv.tv/search-details.asp?showID=7048

In Defense of Food is published in Australia by Penguin.

Joel Salatin is the author of of a number of books including  Everything I Want To Do Is Illegal:  War Stories from the Local Food Front Published by Polyface 2007

What Pollan calls the evocative prose of “cutting edge grocery lit” and wonders at terms such as “from cage-free vegetarian hens” and “humanely raised” “sustainably farmed” and “organic feedlots”.