There’s what looks like an interesting and apparently popular exhibition running in Washington DC at the National Archives about the US Government’s impact on American food. In supply, processing, menus, wartime rationing etc. You can get a ‘taste’ of it at the website What’s Cooking Uncle Sam which has a good exhibition preview section. There are some photographic slide shows and video clips. (Don’t miss the Janet and the Genie video segment, with a surrealist rack of beef livers glistening in the light as a USDA inspector, inspects them.) They also have a Tumblr section for the exhibit with more images from the show.

I assume the actual exhibition has more ‘political’ commentary within it, but it apparently looks at both the good and the lousy impact of Government intervention into feeding its citizens, with some quirks of social commentary such as Nixon’s last meal in the Whitehouse (sliced pineapple?). The short description to this image below says “The Agricultural Adjustment Act (AAA) of 1933 paid farmers subsidies to keep some crops off the market.” The dog eared poster on the wall says that the AAA  ‘Helps farmers hold the soil for the Nation’, along with the abandoned plough, Pilgrim fathers and covered wagons. See this Wikipedia entry for more details about the AA Act. 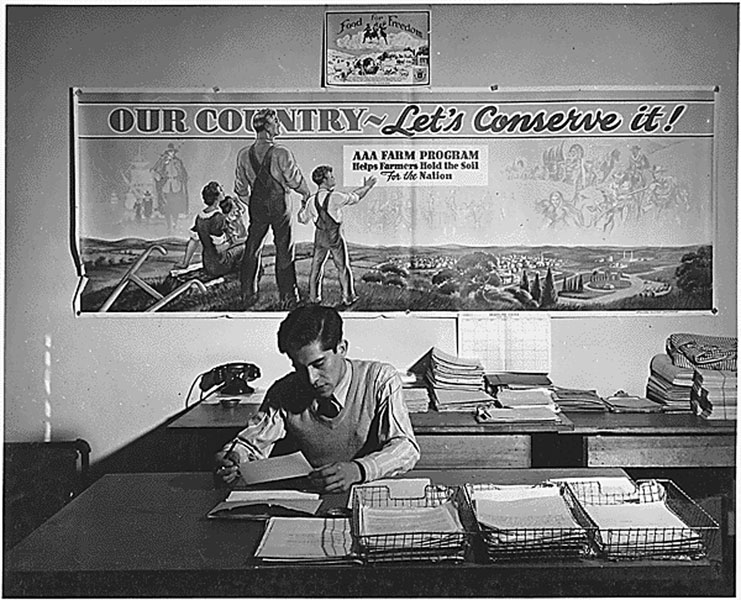 The Act was an initiative to control the supply of seven “basic crops” – corn, wheat, cotton, rice, peanuts, tobacco and milk – by offering payments to farmers in return for taking some of their land out of farming, by not planting a crop. The idea was to keep the prices high, but the impact went further.

Most of the farmers couldn’t afford not to take the government payments.

“In 1937, the Supreme Court ruled that the AAA was unconstitutional, but the basic program was rewritten and again passed into law. Even critics admitted that the AAA and related laws helped revive hope in farm communities. Farmers were put on local committees and spoke their minds. Government checks began to flow. The AAA did not end the Depression and drought, but the legislation remained the basis for all farm programs in the following 70 years of the 20th Century.” Living History Farm.

That leads right up to the current and patently bad any way you look at it, US Farm Bill. See Michael Pollan’s You are what you grow piece on that.

But there’s also some very nostalgic images and posters in the online sample and on Tumblr that I’m sure you’ll enjoy. Like this family watching their radio apparently listening to a Government rural farm program. 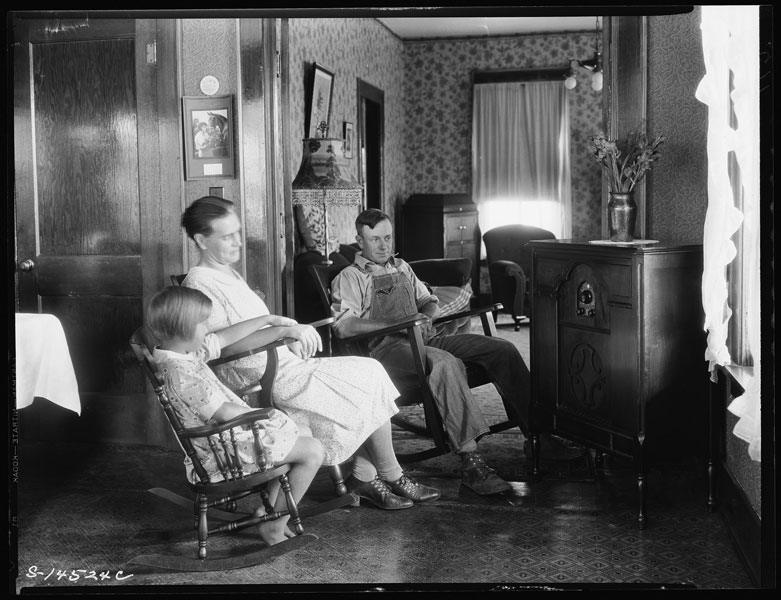 It’s also the first time I heard of Fred Harvey whose railroad restaurants apparently tamed the stomachs of the wild west. There’s a book by investigative journalist Stephen Fried (good name for a food writer) that tells the story of how  “as railroads grew and expanded westward, Harvey established the first chain restaurants, called Harvey Houses, in partnership with the Santa Fe Railroad”. There’s an excerpt on his website, and it’s available on Amazon as a print and eBook. He also has a blog on the book “One Nation under Fred” (Good name that, and it was Fredited by Fried). And there’s even a cookbook of Harvey Houses recipes.

The Harvey Houses was the subject of the MGM musical The Harvey Girls starring Judy Garland.  Here’s the trailer. (Just look at that title font. Gee.)