India is set to see a second consecutive year of record grape exports, with its crop in particular demand in Russia and throughout Europe, the Economic Times reports.

This is a source of some concern for Indian exporters, as record shipments in 2012 resulted in a severe oversupply in Europe, with prices dropping by 50 per cent towards the end of the season.

“As India is the only supplier to Europe during February to April, Indians competed against each other by exporting more, leading to a price crash towards the end of the 2012/13 season,” a Mumbai-based exporter told the Economic Times.

Russia has risen to become a leading market for Indian grapes, with shipments growing tenfold from 2010 to 2012.

“From just about 100 containers in 2010, we exported 1,000 containers to Russia last year,” said Jagannath Khapre, chairman of the All India Grape Exporters Association. “We have now started getting direct orders from the supermarkets in Russia.”

From the Eurofruit website “The international marketing magazine for fresh produce buyers in Europe” see more there.
That article was accompanied by an image of a box of grapes from Mahindra India’s biggest fresh food exporter.

When I read that, I had to head into the archive and drag out a blog I wrote in July 2006.  Many of the links have moved on, but I was pleased with the response this post had then and figured it just might still have some relevance historically. The size of the current table grape crop means that something is changing in India, and I’ll bet their wine making has too.

(This is what a Regional Food post looked like before we started the Magazine. Tiny pictures for 28k modems.)

I’ve just spent a few days in India doing some photography for a new export initiative on the NFIS website. I had some great Indian restaurant meals with the people I was working with during the day, but usually worked through lunch and hot and tired, most evenings my meal was taken in the hotel dining room. Dining alone made tasting more than a couple of dishes and wines seem excessive but I needed to try new things so I did my best (helped by the fact that the prices were very cheap). After work, I’d drink a cold Kingfisher beer, but with dinner as usual I felt like wine.

Most of the wine on their lists was imported (French and a little Australian and Chilean), but there were some local Indian wines. I started at the top of the ‘Indian by the glass’ list and then realised that the waiter would open anything I asked for as long as I was appreciative. And I was. I’m sure in a side by side comparison the wines I drink here would show more depth and character but they were all mostly very drinkable. And having to walk as far as the lift to get ‘home’, I had a glass or two more than I would normally. It only made the Bollywood musicals on the television in my room less comprehensible.

Here are some of the better Indian wines that I made a note of.

Local to me, at least when I was in Bangalore, was Grover Vineyards, 40k north of the city in the Nandi foothills. I was thrown a bit by the mispelling of clairette (a French grape variety I had to look up) as ‘Clarette’ on one wine list.

Grover Viognier Clairette . I didn’t know what clairette’s taste characteristics were, but the viognier was prominent. This was good enough to come back to on the following evening.

There were also a few ordinary chardonnays I didn’t note.

I was eating Southern Indian tandoor cuisine in Bangalore and Indian influenced Chinese meals in Chennai (it’s actually called “Indian Chinese” locally, tasty but strange) and I tried mostly white wines. This seemed to concern one of the waiters (there seemed to be at least three for my table) who asked if perhaps I’d like to try the pin-nott? I did and I must have been surprised enough by the smoothness and flavour not to write down the wine-maker.

All the Indian wines are apparently produced to be immediately drinkable. They’re a touch sweet but they’re aimed at not scaring off the local market, who usually dink beer and whisky with their meals. They were not served quite as chilled as we do. The pinot was room temperature warm (as so was the day).

It wasn’t until November 2004 that the nation’s capital Delhi, allowed the sale of imported alcoholic beverages in retail liquor shops. Wine writer Alok Chandra in his column in the Kolkata Business Standard newspaper lamented that “since retailing is monopolised by the state government, the average liquor shop is still a squalid, crowded, dirty and poorly lit hole-in-the-wall with surly attendants and badly displayed goods. …Of course, since the chaps manning the shops have absolutely no idea about wine or how to store it. I shudder to think what will happen a few months down the line when temperatures in Delhi rise to 30 degrees. This is a common problem almost everywhere in India, where poor storage conditions result in oxidised or cooked wines (and we blame the producer).”

If storing wine is hard, how do you grow grapes in tropical regions where monsoons are the summer characteristic? A quote from a Wall Street Journal article explains that they… 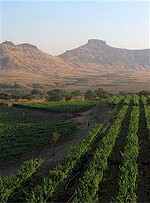 “…grow the grapes in the winter. Nashik (region) has long been famous for its table grapes, and the local farmers know how to prune the vines a second time ahead of the summer monsoon so that they are dormant through the hottest period of the year. Then from October to March, the warm afternoons and cool nights approximate the climate of, say, the Rhone in summer. The strong sun brings up the sugar levels, but a chill down to about 7 degrees Celsius in the evening brings out the subtler flavours of a wine made in a temperate region.” And they have to plant on a slope so the roots don’t get waterlogged in the monsoon rains.

Prices?  The Grovers Viognier Clairette was Rs360 a bottle, about $10 Australian. By comparison a bottle of Jacobs Creek 2005 Semillon Chardonnay ($10 here) costs twice that in India. There is a tariff of 264% on imported wine! I never paid more than 100 rupees for a glass of wine. About $3.

Although there’s a predominance of English language publications available in India and most online sites are English language, there’s often a unique twist to the language that you have to get used to ie.- “In terms of career graph, Mr. Kewadkar shares a vivid work experience” and “Michel Rolland is a kinetic wine consultant”.

There’s no giving of a gift, you get it as a verb – ‘he gifted his son a new guitar’, ‘Gift your child a new computer’ (and computer stores offer ‘upgradisation’ rather than upgrades). There’s also some post-colonial quaintness. Local gin and whiskey are labelled ‘India Made Foreign Liquor’. The Grover Vineyards front labels all proudly (or is it for credibility?) state ‘Made in Collaboration with Mr Michel Rolland, Bordeaux, France’. Flamingo wines home page boasts they have ‘Sha – a perfect mix of brix, acidity, flavour and aroma.’ Brix as you know is sugar content.

Grover Wines press cutting page is an insight into the Indian food and wine media, where other lifestyle products are mixed in. ‘Lifestyle‘ is a big buzzword in modern India and adorns the shopping malls.

The Indian Wine website has a list of ‘Manufacturers’ and other articles in Indian news sites on wine.

Gourmet India an enthusiast’s website (mostly about western dining places in India) where I found this quote..

“You can’t be a real country unless you have a beer and an airline; it helps if you have some kind of a football team, or some nuclear weapons, but at the very least you need a beer.” Frank Zappa

Of course in India there’s Kingfisher Airlines to go with the beer.  And nuclear weapons.

(While I was in Bangalore, Kingfisher were launching the 2006 Bangalore Great Food Guide. It seems like there’s only this Times one available now)

I’ll leave you with an image of one of my typical Bangalore breakfasts. Gee, a light breakfast (or is that ghee?) 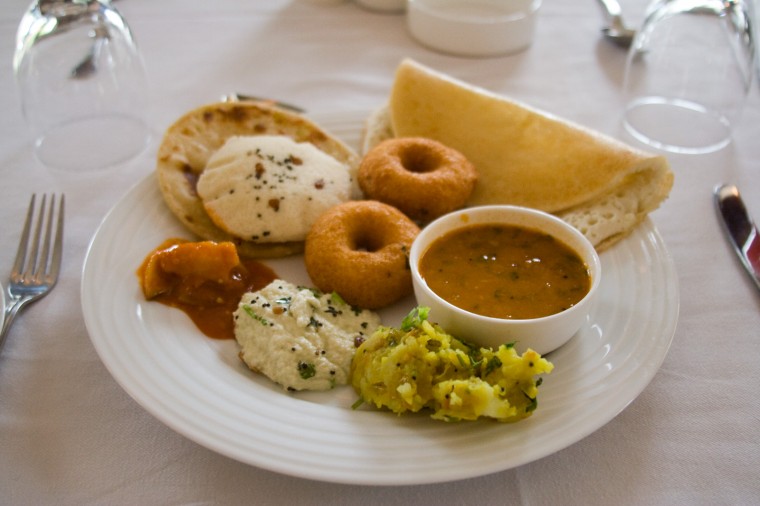